Items related to The Justice Game 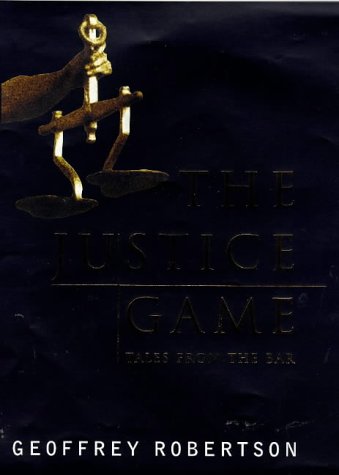 Geoff Robertson was born in Australia, but came to London in 1970. He made his name as the fearless defender of Oz magazine at the celebrated trial and went on to engage in some of the most newsworthy cases in recent history. He has defended John Stonehouse, Cynthia Payne, Salman Rushdie, Kate Adie, Arthur Scargill, Daniel Sullivan, GAY NEWS, 'The Romans of Britain', Niggaz with Attitude', and a pair of foetal earrings. The book includes accounts of recent cases includes accounts of recent cases including the defence of a West London gym owner against the Prince of Wales, the Matrix Churchill affair, and the defence of the GUARDIAN in the cash-for-questions affair. Hugely readable, funny, scandalou, revelatory, this will become one of the great books about the law. It will cause considerable controversy with its disclosure of some of the hidden details behind some very high-profile recent legal cases. (1997-02-07)

As a young Australian barrister, Robertson found himself involved in the Oz trial; a frothingly moralistic judge went to some lengths to jail three editors of an underground magazine, and was duly humiliated on appeal. Success leads to opportunity; Robertson has found himself at the heart of a sequence of crucial freedom of expression trials--the Gay Newsblasphemy trial, the attempt to bust the National theatre over a play in which male rape took place, the arrest of a painter whose chosen subject was bank notes. His account of his career concentrates on these, and on his own entire brilliance in them; he is not a modest man, nor is there any particular reason why he should be, especially given how sharp and witty his accounts are. Robertson has also been involved in other causes cčlebres--he knows all about the Michael X case, and a variety of other capital cases in the Caribbean, and is fascinating on the Matrix Churchill case and the various libel actions around the "cash for questions" sleaze row. Anyone interested in the issues is going to find this a useful book--but the average intelligent reader is going to find the account of courtroom battles a guilty pleasure in itself. --Roz Kaveney

"For all his reputation as a radical lawyer, flailing at the Establishment, he proves himself to be a believer" (Independent)

"This wonderful book...reads like a John Grisham, infused with moral anger" (Independent)

"Well-written, powerful...Robertson's work has changed the way government works, and made it more accountable...a good read for people of any age" (Jack Straw New Statesman)

"Geoffrey Robertson Q.C. is one of those few fearless and romantic lawyers dedicated to reducing the difference between law and justice" (David Jessel Scotland on Sunday)