Items related to Sea Dragons: Predators of the Prehistoric Oceans 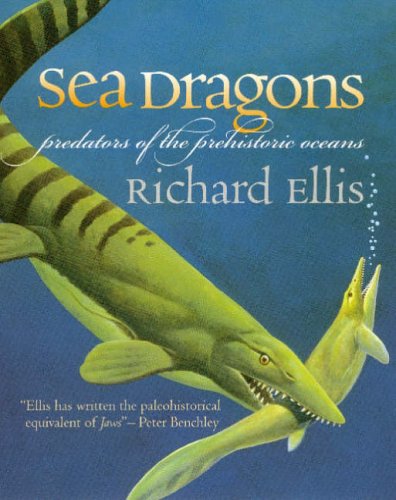 In the days when dinosaurs dominated the earth, their marine counterparts - every bit as big and ferocious - reigned supreme in prehistoric seas. In this book, Richard Ellis takes us back to the Mesozoic era to resurrect the fascinating lives of these giant seagoing reptiles. Working from the fossil record, Ellis explores the natural history of these fierce predators, speculates on their habits, and tells how they eventually became extinct - or did they? He traces the 200-million-year history of the great ichthyosaurs, plesiosaurs and mosasaurs who swam the ancient oceans - and who may, according to some, still frequent the likes of Loch Ness. Picture if you will 70-foot dragons with foot-long serrated teeth, or an animal that looked like a crocodile crossed with a shark the size of a small yacht. With its impossibly long neck, Plesiosaurus conybeari has been compared to "a giant snake threaded through the body of a turtle". At a length of nearly 60 feet, Mosasaurus hoffmanni boasted powerful jaws that could crunch up even the hardest-shelled giant sea turtle. And Kronosaurus queenslandicus, perhaps the most formidable of the lot, had a skull nine feet long - more than twice that of Tyrannosaurus rex - with teeth to match. "Sea Dragons" draws upon up-to-date scientific research to vividly reconstruct their lives and habitats. Their fossils have been found all over the world - in Europe, Australia, Japan and even Kansas - in lands that once lay on the floors of Jurassic and Triassic seas. Along the way, the book also provides intriguing insights into and entertaining tales about the work, discoveries and competing theories that compose the world of vertebrate paleontology. The text is also accompanied by Ellis' own illustrations of how these creatures probably appeared and, through these likenesses, we are invited to speculate on their locomotion, their predatory habits and their lifestyles.

"This is really the first book to present a detailed summary of the history of ideas on marine reptile paleontology. It's also very readable and accessible, which is one of Ellis's trademarks as a writer."

Richard Ellis is a research associate in vertebrate paleontology at the American Museum of Natural History.