Items related to An Untouchable Community in South India: Structure... 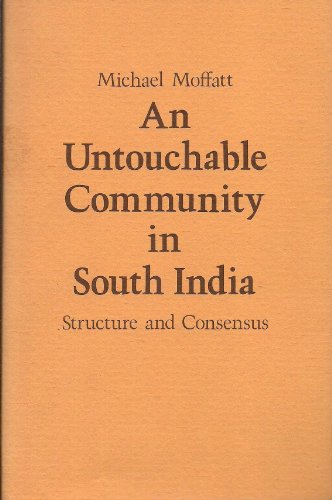 While many studies suggest that Indian Untouchables do not entirely share the hierarchical values characteristic of the caste system, Michael Moffatt argues that the most striking feature of the lowest castes is their pervasive cultural consensus with those higher in the system. Though rural Untouchables question their particular position in the system, they seldom question the system as a whole, and they maintain among themselves a set of hierarchical conceptions and institutions virtually identical to those of the dominant social order.

Based on fourteen months of fieldwork with Untouchable castes in two villages in Tamil Nadu, south India, Professor Moffatt's analysis specifies ways in which the Untouchables are both excluded and included by the higher castes. Ethnographically, he pursues his structural analysis in two related domains: Untouchable social structure, and Untouchable religious belief and practice.

The author finds that in those aspects of their lives where Untouchables are excluded from larger village life, they replicate in their own community nearly every institution, role, and ranked relation from which they have been excluded. Where the Untouchables are included by the higher castes, they complete the hierarchical whole by accepting their low position and playing their assigned roles. Thus the most oppressed members of Indian society are often among the truest believers in the system.

1. An Untouchable Community in South India, Structure and Consensus

Book Description Princeton University Press, 1979. Condition: Good. First Edition. Former Library book. Shows some signs of wear, and may have some markings on the inside. Seller Inventory # GRP61054482

3. An Untouchable Community in South India: Structure and Consensus

Book Description Princeton University Press 1979-05-21, 1979. Hardcover. Condition: Good. Item is in good condition. Some moderate creases and wear. This item may not come with CDs or additional parts including access codes for textbooks. Might be an ex-library copy and contain writing/highlighting. The dust jacket might be missing. Seller Inventory # DS-0691093776-3

4. AN UNTOUCHABLE COMMUNITY IN SOUTH INDIA : STRUCTURE AND CONSENSUS

Book Description Princeton University Press, Princeton, 1979. Hardcover. Condition: Very Good Plus. Dust Jacket Condition: Very Good. First Edition. FIRST EDITION. PRIVATELY OWNED. UNMARKED. Light foxing to top edge. 10 tables, 9 maps, 9 figures. List of 10 myths. Dustjacket very good. Sunning to jacket spine. Very mild shelfwear to jacket. Brown lettering to spine and front of orange-gold jacket. Bright, gilt debossed lettering (title on dark brown rectangle edged in gilt), to spine of lighter brown cloth-covered boards. 323 pp. with bibliography and index. Clean, tight, bright. Based on a 14 month study, the author argues that even in the lowest castes, they share the same pervasive cultural consensus as with those highter in the system. "Though rural Untouchables question their particular position in the system, they seldom question the system as a whole, and they maintain among themselves a set of hierarchical conceptions and institutions virtually identical to those of the dominant social order," (front flap). Seller Inventory # 513

Book Description Princeton University Press, 1979. Condition: Good. A+ Customer service! Satisfaction Guaranteed! Book is in Used-Good condition. Pages and cover are clean and intact. Used items may not include supplementary materials such as CDs or access codes. May show signs of minor shelf wear and contain limited notes and highlighting. Seller Inventory # 0691093776-2-4

6. An Untouchable Community in South India: Structure and Consensus

8. An Untouchable Community in South India: Structure and Consensus