Items related to In the Eye's Mind: Vision and the Helmholtz-Hering...

In the Eye's Mind: Vision and the Helmholtz-Hering Controversy (Princeton Legacy Library) 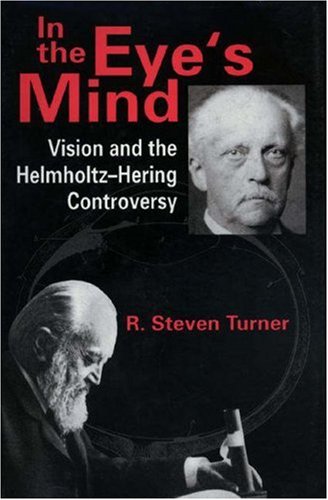 One of the most persistent controversies of modern science has dealt with human visual perception. It erupted in Germany during the 1860s as a dispute between physiologists Hermann von Helmholtz, Ewald Hering, and their schools. Well into the twentieth century these groups warred over the origins of our capacity to perceive space, over the retinal mechanisms that mediate color sensations, and over the role of mind, experience, and inference in vision. Here R. Steven Turner explores the impassioned exchanges of those rival schools, both to illuminate the clash of theory and to explore the larger role of controversy in the development of science. Controversy, he suggests, is constitutive of scientific change, and he uses the Helmholtz-Hering dispute to illustrate how polemics and tacit negotiation shape evolving theoretical stances.

Turner focuses on the arguments and issues of the dispute, issues that ranged from the interpretation of color blindness and optical illusions to the therapeutic practices of clinical ophthalmology. As well, he focuses on the personalities, institutions, disciplinary structures, and methodological commitments that shaped the dispute, including the schools' rhetorical strategies. He explores the incommensurability of the protagonists' viewpoints and examines the reception of the theories and the changing fortunes of the schools. Finally, Turner traces the controversy into the twentieth century, where the issues continue to inform the study of vision today.

"Turner has clearly done his homework and--unlike many people who write on the history of colour vision--has read the original texts. He understands the issues and the methods used in studying them, and does an excellent job of defining the jargon of the era, which is often comprehensible only in context."--Nature