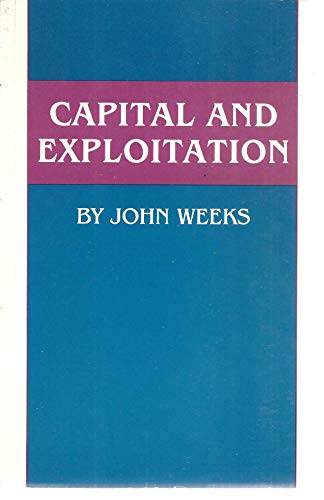 Professor Weeks proposes that the key to Marx's critique of capitalist society is the labor theory of value. A commodity-producing society, he argues, necessarily gives rise to a capitalist society, so that commodity production and the exploitation of labor are inseparably linked.

John. F. Weeks is Professor of International Politics and Economics at MIddlebury College. An internationally recognized development economist with extensive policy-related work in developing countries including Nigeria, Kenya, Somalia, Jamaica, Peru, and Nicaragua, he has served as consultant for most of the major multilateral agencies, including the World Bank, the Inter-American Development Bank, and the Food and Agriculture Organization of the United Nations.

Book Description Princeton University Press, 1982. Condition: Good. A+ Customer service! Satisfaction Guaranteed! Book is in Used-Good condition. Pages and cover are clean and intact. Used items may not include supplementary materials such as CDs or access codes. May show signs of minor shelf wear and contain limited notes and highlighting. Seller Inventory # 0691003661-2-4

Book Description Princeton University Press, Princeton, NJ, 1981. Paperback. x., 223p., soft bound in 8.5x5.5 inch coated wraps; somewhat edgeworn on the outside and much underlined (in different styles) within. A fair-only "reading" copy. Week's elaboration of Classical Marxism based on his courses on the subject at the Economics Department of American University, Washington DC. Seller Inventory # 111055

Book Description Princeton University Press, Princeton, NJ, 1981. Paperback. x., 223p., soft bound in 8.5x5.5 inch coated wraps; rather worn with handling, and edges and endpapers are quite foxed. A slightly better than "reading copy" Week's elaboration of Classical Marxism based on his courses on the subject at the Economics Department of American University, Washington DC. Seller Inventory # 258322

Book Description Princeton University Press 1982-01-21, 1982. Paperback. Condition: Good. Item is in good condition. Some moderate creases and wear. This item may not come with CDs or additional parts including access codes for textbooks. Might be an ex-library copy and contain writing/highlighting. Photos are stock pictures and not of the actual item. Seller Inventory # DS-0691003661-3