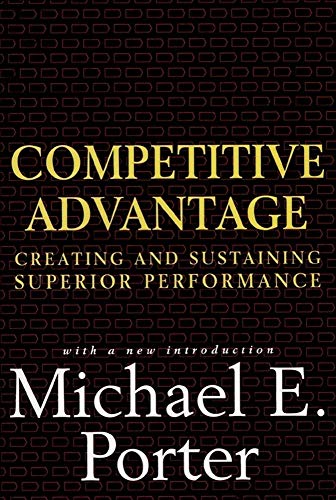 COMPETITIVE ADVANTAGE introduces a whole new way of understanding what a firm does. Porter's groundbreaking concept of the value chain disaggregates a company into 'activities', or the discrete functions or processes that represent the elemental building blocks of competitive advantage. Now an essential part of international business thinking, COMPETITIVE ADVANTAGE takes strategy from broad vision to an internally consistent configuration of activities. Its powerful framework provides the tools to understand the drivers of cost and a company's relative cost position. Porter's value chain enables managers to isolate the underlying sources of buyer value that will command a premium price, and the reasons why one product or service substitutes for another. He shows how competitive advantage lies not only in activities themselves but in the way activities relate to each other, to supplier activities, and to customer activities. That the phrases 'competitive advantage' and 'sustainable competitive advantage' have become commonplace is testimony to the power of Porter's ideas. COMPETITIVE ADVANTAGE has guided countless companies, business school students, and scholars in understanding the roots of competition. Porter's work captures the extraordinary complexity of competition in a way that makes strategy both concrete and actionable.

Financial Times The most influential management book of the past quarter century....A veritable goldmine of analytical concepts and tools to help companies get a much clearer grasp of how they can create and sustain competitive advantage.

Philip Kotler S.C. Johnson & Son, Distinguished Professor of International Marketing, Northwestern University Michael Porter has done it again. Having defined the 'what' and 'why' of competitive strategy in his earlier book, he now defines the 'how' in Competitive Advantage.

Newsday A sharp, aggressive and cogently reasoned book about competition that your smarter rivals will try to get to first.

Michael E. Porter, one of the world's leading authorities on competitive strategy and international competitiveness, is the C. Roland Christensen Professor of Business Administration at the Harvard Business School. In 1983, Professor Porter was appointed to President Reagan's Commission on Industrial Competitiveness, the initiative that triggered the competitiveness debate in America. He serves as an advisor to heads of state, governors, mayors, and CEOs throughout the world. The recipient of the Wells Prize in Economics, the Adam Smith Award, three McKinsey Awards, and honorary doctorates from the Stockholm School of Economics and six other universities, Porter is the author of fourteen books, among them Competitive Strategy, The Competitive Advantage of Nations, and Cases in Competitive Strategy, all published by The Free Press. He lives in Brookline, Massachusetts.