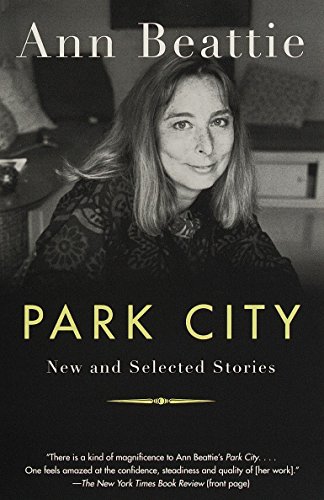 For more than twenty-five years, Ann Beattie's short fiction has held a mirror up to America, portraying its awkwardly welded families, its loosely coupled couples, and much-uprooted children with acuity, humor, and compassion. This triumphant collection includes thirty-six of the finest stories of her career including eight new pieces that have not appeared in a book before. Beattie's characters embark on stoned cross-country odysseys with lovers who may leave them before the engine cools. They comfort each other amid the ashes of failed relationships and in hospital waiting rooms. They try to locate themselves in a world where all the old landmarks have been turned into theme parks. Funny and sorrowful, fiercely compressed yet emotionally expansive, Park City is dazzling.

"There is a kind of magnificence to Ann Beattie's Park City. . . . One feels amazed at the confidence, steadiness and quality of [her work]." --The New York Times Book Review (front page)

"Like a boxed set of Miles Davis CDs . . . both superb in itself and an essential piece of history. . . . [Beattie is] one of our era's most
vital masters of the short form." --The Washington Post Book World "Graceful and rewarding." --The Philadelphia Inquirer "Beattie has a facility . . . that is breathtaking, a fluidity that delights. . . . [She is] one of the most influential short-fiction writers of her generation." --Newsday About the Author:

Born in 1947, Ann Beattie grew up in the suburbs of Washington, D.C., attended college at American University, and went on to do graduate work in English literature at the University of Connecticut. She began writing stories out of frustration with her doctoral work. After rejecting twenty-two submissions, The New Yorker published Beattie's "A Platonic Relationship" in 1974, and Beattie became a regular contributor to the magazine. Her first collection of stories, Distortions, and her first novel, Chilly Scenes of Winter, appeared simultaneously in 1976 and initiated a long-standing critical debate as to whether Beattie's greater strength is in the story or the novel. All critics agree, however, on the uniqueness of her style and her uncanny ability to expose certain truths about contemporary life, particularly as it lived by those of her own generation and social class. She lives in Maine and Key West with her husband, the painter Lincoln Perry.