Items related to My First 79 Years 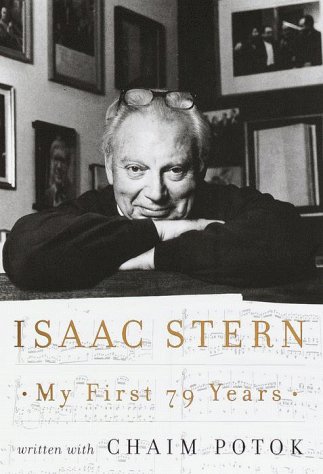 The world famous violinist describes his decades-long love affair with the world of music, his friendships with such notable colleagues as Leonard Bernstein and Pablo Casals, his ideas and beliefs about art and life, and his dedicated work with younger musicians

Isaac Stern is one of the most celebrated violinists of the century. He lives in Connecticut with his wife, Linda, and Gracie, the cat.

Chaim Potok is an ordained rabbi and has written many best-selling books, including The Chosen and My Name Is Asher Lev. He lives in Pennsylvania.

ur years, Isaac Stern has been a great--and greatly loved--performing artist, famous for his profound music-making, his gusto for life, his passionate dedication to sharing his knowledge and wisdom with younger musicians, and his determination in a good cause (Stern is, after all, The Man Who Saved Carnegie Hall). Indeed, there is no more revered musician in the world than Isaac Stern, revered not only as a great violinist but as a warm and generous personality and as a crucial figure and spokesperson in the world of the arts.

Brought to America from Russia when he was ten months old, Stern grew up in San Francisco and was quickly recognized as an extraordinary talent. He began performing publicly while still very young, and was soon touring across the country and around the world. His fame escalated when he led the fight to save Carnegie Hall, and again when he was the subject of the Academy Award-winning documentary film From Mao to Mozart.

In this book he shar