Items related to One Day in the Life of Ivan Denisovich (Everyman's... 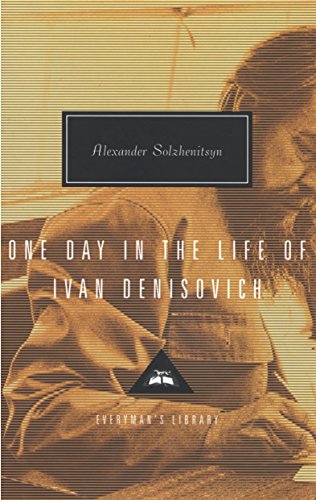 From the icy blast of reveille through the sweet release of sleep, Ivan Denisovich endures. A common carpenter, he is one of millions viciously imprisoned for countless years on baseless charges, sentenced to the waking nightmares of the Soviet work camps in Siberia. Even in the face of degrading hatred, where life is reduced to a bowl of gruel and a rare cigarette, hope and dignity prevail. This powerful novel of fact is a scathing indictment of Communist tyranny, and an eloquent affirmation of the human spirit.

"Cannot fail to arouse bitterness and pain in the heart of the reader. A literary and political event of the first magnitude."
-New Statesman

"Stark . . . the story of how one falsely accused convict and his fellow prisoners survived or perished in an arctic slave labor camp after the war."
-Time "Both as a political tract and as a literary work, it is in the Doctor Zhivago category."
-Washington Post "Dramatic . . . outspoken . . . graphically detailed . . . a moving human record."
-Library Journal Book Description: