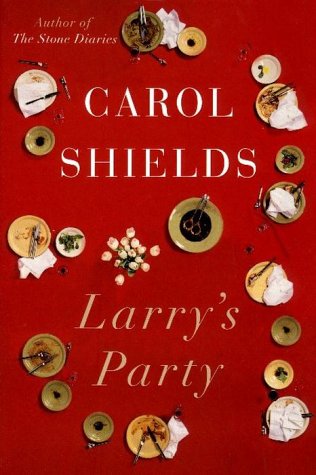 The Stone Diaries marked a new phase in a literary career already ablaze with achievement. As well as the many international awards it received, including the Pulitzer Prize, the National Book Critics Circle Award and the Governor General's Award, the book also met with universal critical acclaim and topped bestseller lists around the world. "Carol Shields," raved Maclean's, "has crafted a small miracle of a novel." "The Stone Diaries," said the New York Times Book Review, "reminds us again why literature matters."

The San Diego Tribune called The Stone Diaries "a universal study of what makes women tick." Now, in Larry's Party, Carol Shields does the same for men.

Larry Weller, born in 1950, is an ordinary guy made extraordinary by his creator's perception, irony and tenderness. Larry's Party gives us, as it were, a CAT scan of his life, in episodes between 1977 and 1997 that flash backward and forward seamlessly. As Larry journeys toward the new millennium, adapting to society's changing expectations of men, Shields' elegant prose transforms the trivial into the momentous. We follow this young floral designer through two marriages and divorces, his interactions with parents, friends and a son. And throughout, we witness his deepening passion for garden mazes -- so like life, with their teasing treachery and promise of reward. Among all the paradoxes and accidents of his existence, Larry moves through the spontaneity of the seventies, the blind enchantment of the eighties and the lean, mean nineties, completing at last his quiet, stubborn search for self.

Larry's odyssey mirrors the male condition at the end of our century with targeted wit, unerring poignancy and faultless wisdom.