Items related to Koba the Dread 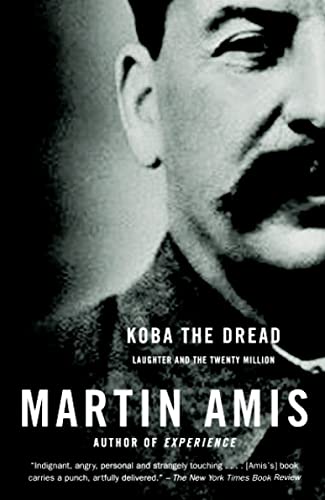 A brilliant weave of personal involvement, vivid biography and political insight, Koba the Dread is the successor to Martin Amis’s award-winning memoir, Experience.

Koba the Dread captures the appeal of one of the most powerful belief systems of the 20th century -- one that spread through the world, both captivating it and staining it red. It addresses itself to the central lacuna of 20th-century thought: the indulgence of Communism by the intellectuals of the West. In between the personal beginnings and the personal ending, Amis gives us perhaps the best one-hundred pages ever written about Stalin: Koba the Dread, Iosif the Terrible.

The author’s father, Kingsley Amis, though later reactionary in tendency, was a “Comintern dogsbody” (as he would come to put it) from 1941 to 1956. His second-closest, and then his closest friend (after the death of the poet Philip Larkin), was Robert Conquest, our leading Sovietologist whose book of 1968, The Great Terror, was second only to Solzhenitsyn’s The Gulag Archipelago in undermining the USSR. The present memoir explores these connections.

Stalin said that the death of one person was tragic, the death of a million a mere “statistic.” Koba the Dread, during whose course the author absorbs a particular, a familial death, is a rebuttal of Stalin’s aphorism.

Koba the Dread is a book about Stalin and the past and present culpability of intellectuals rather than a personal memoir. It's personal to Amis because his father Kingsley became a card-carrying Communist in 1941 and remained so for 15 years: along with the majority of intellectuals everywhere he chose the big Stalinist lie over the truth. The only reasonable excuse for believing the Stalinist story, Amis suggests, is perhaps that "the real story-–the truth—-was entirely unbelievable". The bulk of the book is taken up with the real story of Stalinism and--given the powerful subject matter and Amis's literary skill--one shouldn't be surprised to hear that it makes for a riveting read. Even if you are already familiar with the story the facts still stagger the imagination.

As well as being an indictment of the woolly-minded utopianism of his father's generation, the book is a direct challenge to the lingering romanticism that, even today, attaches itself to Bolshevism, to Lenin, and in particular to Trotsky. That challenge comes in the form of a splendid letter--in the final, personal section of the book--to his long-time friend Christopher Hitchens. In it, he reminds his friend "Comrade Hitchens" that "Bolshevism presents a record of baseness and inanity that exhausts all dictionaries" before confessing his confusion as to "why you wouldn't want to put more distance between yourself and these events than you do, with your reverence for Lenin and your unregretted discipleship of Trotsky".

The myth Amis wants to quash is the idea that the "real" revolution was lost with the death of Lenin, the murder of Trotsky and the liquidation of the Bolshevik old guard. Any "differences between the regimes of Lenin and Stalin were quantitative, not qualitative" and, as individuals, Lenin was a "congenital moral imbecile" while Trotsky's smattering of literary talent concealed "a murdering bastard and a fucking liar" who got what he deserved. They were nun-killers all and they did it with gusto. The final verdict, the final indictment, is that under Bolshevik rule--under Lenin as well as Stalin--"the value of human life collapsed".

It's a curious fact that Robert Conquest--the man who wrote the definitive account of the Stalinist purges while many intellectuals were still in denial--was a personal friend of the Amis family. Conquest's The Great Terror is still the source to visit if want the full story whereas Koba the Great is a short book packed with the most interesting and shocking facts about the Stalin era, with a thoughtful and often persuasive personal commentary from Amis. --Larry Brown

With a new Martin Amis what you get is controversy, reviews, profiles and interviews, and somewhere amongst all that the book itself, which inevitably turns out to be well worth reading despite all the noise going on around it. This one was already attracting negative comments in book pages on the strength of the blurb alone. Koba the Dread is another memoir in the style of Experience, this time examining the fascination of communism for intellectuals in the West. Koba is Stalin, who described the death of a million people as a mere statistic. You wouldn't think so to read his reviews, but Amis is a great moralist, which is why his Nazi doctor novel Time's Arrow is still his masterpiece. In Stalin, Amis has discovered another subject worthy of his moral fervour.

Book Description Paperback. Condition: As New. No Jacket. Pages are clean and are not marred by notes or folds of any kind. ~ ThriftBooks: Read More, Spend Less. Seller Inventory # G0676975186I2N00

Koba the Dread: Laughter and the Twenty Million

Book Description Trade Paperback. Condition: Good. ISBN: 0-676-97518-6, Tape around the spine bottom; previous owner's stamp and penned name to the ffep; rear cover a little grubby. Text is clean. 'During his long reign, Iosif Vissarionavich Stalin (aka 'Koba') presided over the murder of more than twenty million people. He killed not just his enemies but their wives and children; he killed his allies and friends; he killed census takers who made the mistake of documenting his disastrous inroads into the Soviet population.' 306 pages. Book. Seller Inventory # 038393