Items related to Antigone. The Women of Trachis. Philoctetes. Oedipus... 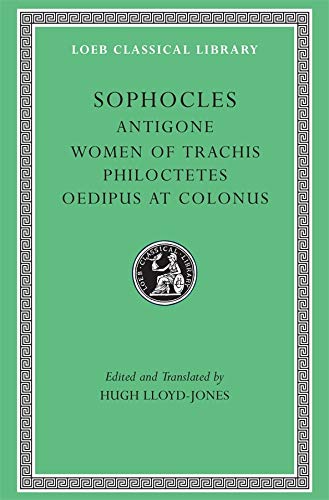 Sophocles (497/6-406 BCE), with Aeschylus and Euripides, was one of the three great tragic poets of Athens, and is considered one of the world's greatest poets. The subjects of his plays were drawn from mythology and legend. Each play contains at least one heroic figure, a character whose strength, courage, or intelligence exceeds the human norm--but who also has more than ordinary pride and self-assurance. These qualities combine to lead to a tragic end. Hugh Lloyd-Jones gives us, in two volumes, a new translation of the seven surviving plays. Volume I contains Oedipus Tyrannus (which tells the famous Oedipus story), Ajax (a heroic tragedy of wounded self-esteem), and Electra (the story of siblings who seek revenge on their mother and her lover for killing their father). Volume II contains Oedipus at Colonus (the climax of the fallen hero's life), Antigone (a conflict between public authority and an individual woman's conscience), The Women of Trachis (a fatal attempt by Heracles' wife to regain her husband's love), and Philoctetes (Odysseus's intrigue to bring an unwilling hero to the Trojan War). Of his other plays, only fragments remain; but from these much can be learned about Sophocles' language and dramatic art. The major fragments--ranging in length from two lines to a very substantial portion of the satyr play The Searchers--are collected in Volume III of this edition. In prefatory notes Lloyd-Jones provides frameworks for the fragments of known plays.

Lloyd-Jones' prose is, then, just right for today's taste, which is intolerant of another's poetic sensibility interposed between itself and Sophocles.--Donald Lyons "New Criterion "

Sir Hugh is providing, that is, what Nabokov, in rendering Eugene Onegin, called a metaphrase--a scrupulous, bare explanation of the original...Plainspun prose indeed, but attractively diaphanous. We can be pretty sure that these were the exact lexical intentions of Sophocles...Reading the seven Sophocles plays in the new Loeb version only confirms his impenetrable greatness.--Donald Lyons "New Criterion "

1. Sophocles : Antigone, the Women of Trachis, Philoctetes Oedipus at Colonus

5. Antigone. the Women of Trachis. Philoctetes. Oedipus at Colonus (Hardcover)

Book Description Hardcover. Condition: New. Hardcover. Sophocles (497/6-406 BCE), with Aeschylus and Euripides, was one of the three great tragic poets of Athens, and is considered one of the world's greatest poets. The subjects of his plays w.Shipping may be from multiple locations in the US or from the UK, depending on stock availability. 608 pages. 0.395. Seller Inventory # 9780674995581

10. Sophocles : Antigone, the Women of Trachis, Philoctetes Oedipus at Colonus