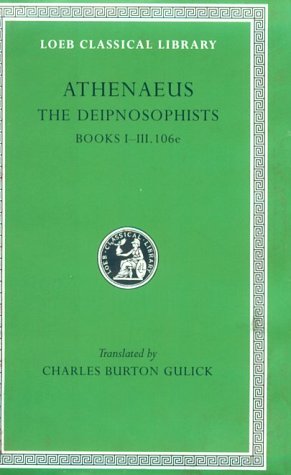 Athenaeus (AD ca. 170ca. 230), a Greek of Naucratis in Egypt, lived in Rome and wrote a historical work now lost. Of the fifteen books of his surviving Deipnosophists ('Sophists at Dinner'), the first two and parts of the third, eleventh, and fifteenth exist only in summary, the rest apparently complete. In it he pretends to tell a friend about a banquet at a scholar's house whither the learned guests brought extracts from poetry for recitation and discussion. Much of the matter however concerns the food provided and accessories. One learns about cooks, strange dishes, wines, menu cards, and countless other matters. Athenaeus was an antiquarian. The whole work, which mentions nearly eight hundred writers and two thousand five hundred writings, is a large treasury of information not only about table matters but also music, dances, games, and all sorts of literary subjects. And it abounds in quotations, mostly made direct by Athenaeus himself, from authors whose writings have not survived. The Loeb Classical Library edition of The Deipnosophists is in seven volumes. There is a comprehensive index in the final volume.