Items related to The Sacralization of Politics in Fascist Italy

Gentile, Emilo The Sacralization of Politics in Fascist Italy

The Sacralization of Politics in Fascist Italy 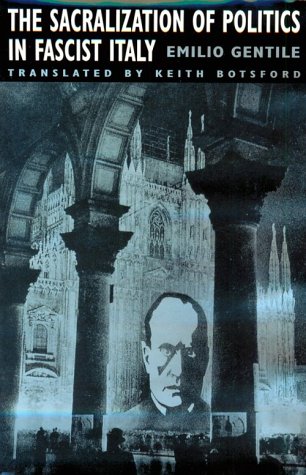 Fascism was the first and prime instance of a modern political religion. Rereading signs, symbols, cults and myths, Italy's leading scholar of Fascism offers a history of Italian nationalism as a civic religion, albeit in its emtreme form, and of Italian Fascism as a vital catalyst for contemporary mass politics. Emilio Gentile decodes Italy culturally, going beyond political and social dimensions that explain Italy's Fascist past in terms of class, or the cynicism of its leaders, or modernizing and expansionist ambitions. By looking back at the Risorgimento's civic and moral renewal of the Italians as a free people educated in the faith and worship of a "national religion", at the jarring countereffects of the secularized nation-state not trusting mass political mobilization, and at Fascism's retrieval of history from Rome, the French Revolution and Romanticism, Gentile reconstructs the cultural configurations of a sacred politics. He shows how Mussolini used the concept of propaganda as a project in civic pedagogy, and how the Fascists thus cultivated a new consiousness that filled the void left by the decline of traditional religion. Fascism mobilized the masses through spectacle and public ceremony in an effort to conquer and shape the mentality and customs of a still emerging nation.

[This book] has precipitated both new research into, and vigorous theoretical debate about the myths, rituals, symbols, monuments and other spectacles of Fascist Italy...[Gentile's] account is undoubtedly the best brief introduction to the Italian Fascists' use of public spectacle, ranging from annual commemorations of the March on Rome and other key events in the Fascist calendar to the construction of monumental architecture.--Tobias Abse "South European Society & Politics " Emilio Gentile is one of Italy's most prolific and influential students of Italian fascism, and it is good to have this thoroughly researched work, published in Italian in 1993, available in a worthy English translation...Gentile has made a major contribution not only to Italian history but to our ongoing effort to grasp the contours of the modern political experiment.--David D. Roberts "American Historical Review " The author's central purpose in [this] book is to ask whether Italian fascism truly was a religion. Its fusion of politics and art, commitment of self to a higher purpose outside the self and appropriation of a people's existing myths makes the answer a resounding yes...[Gentile] tells his story of Italian fascism's myths, rituals and monuments well in this book.--Colin Walters "Washington Times " Gentile's superb study, originally published in Italy in 1993, is the fruition of articles he has previously written on fascists Italy's institutionalization of a new civic religion, the first since the French Revolution. Under fascism the political arena became permeated with myths, rites, and symbols of a secular religion, imbued with fundamental values, and intended to mold the moral consciousness and meaning of existence for all Italians. Gentile traces the foundations of this civic religion...[T]his fine English translation of Gentile's innovative and well-illustrated work is an invaluable addition to the literature on the sacralization of politics.--Choice Gentile's book is the finest work in any language in explaining fully the development of Italian Fascism as a civic and political religion. In all the lengthy bibliography on Fascism, none other makes this fundamental aspect of Fascism so understandable. I consider it one of the five or six really basic books on Italian Fascism.--Stanley. G. Payne, author of A History of Fascism, 1914-1945 This book penetrates to the core of the fascist experience. It analyzes for the first time its political liturgy as a means of self-representation; it gives a whole new dimension to the ideals upon which fascist rule was based. Among recent works on fascism, this book makes one of the most original and essential contributions.--George L. Mosse, author of The Culture of Modern Europe Gentile's mastery of Italian history and of the literature on fascism is dazzling. The Sacralization of Politics in Fascist Italy is beautifully written and has extraordinary breadth, outstanding range, conceptual unity, and an uncanny ability to cite just the right bit of evidence at each step of the way. I would not be a bit surprised if it became a classic work.--Walter L. Adamson, author of Avant-Garde Florence: From Modernism to Fascism Emilio Gentile is one of the most important and innovative historians working on Fascism anywhere today...Harvard University Press have now translated one of his most interesting and potentially controversial books, originally entitled Il culto del littono (The Cult of the Lictor, 1993), and it is full of challenging insights into the strange hybrid creature that was Italian Fascism. It is sure to take its deserved place as a major reinterpretation of the Fascist phenomenon...Gentile's book is...full of exciting detail, insight and clarity of direction...This is an important work, and its translation into English should be greatly welcomed.--Robert Gordon "Patterns of Prejudice [UK] "

Emilio Gentile is Professor of Contemporary History in the Faculty of Political Science at the University of La Sapienza, Rome.