Items related to Prosecuting Crime in the Renaissance: England, Germany,... 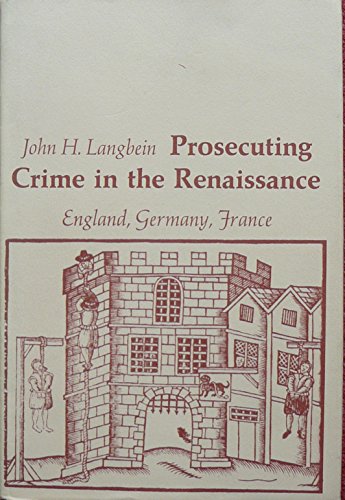 Our present system of criminal prosecution originated in England in the sixteenth century. Langbein traces its development, which was at its most intense during the reign of Queen Mary. He shows how the common law developed a system of official investigation and prosecution that incorporated the medieval institution of the jury trial. He places equal emphasis on the role of the justices of the peace as public prosecutors. The second half of the book compares the English system with those of the Holy Roman Empire (Germany) and France. He concludes by refuting the popular opinion that the English were strongly indebted to continental models. "This is an excellent work of scholarship, exhibiting wide research, erudition and analytical ability." --Joseph H. Smith, Harvard Law Review 88 (1974-1975) 485 JOHN LANGBEIN is Sterling Professor of Law and Legal History at Yale Law School. He has held academic positions at Stanford University, Oxford University, the Max-Planck-Institut für Europäische Rechtsgeschichte and the Max-Planck-Institut für Ausländisches und Internationales Strafrecht. Langbein is a member of the American Academy of Arts and Sciences, the International Academy of Comparative Law, the International Association of Procedure Law, and other organizations in the fields of legal history and comparative law. Some of his most distinguished publications and articles include History of the Common Law: The Development of Anglo-American Legal Institutions (2009), Torture and the Law of Proof: Europe and England in the Ancient Regime (1977), and "The Supreme Court Flunks Trusts," Supreme Court Review (1991).