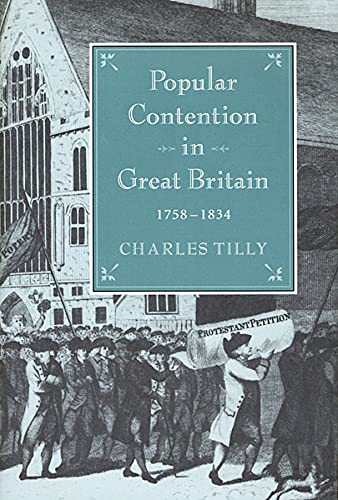 The author elucidates four distinct phases in the transformation to mass political participation and identifies the forms and occasions for collective action that characterized and dominated each. He provides descriptions not only of a wide variety of popular protests but also of such influential figures as John Wilkes, Lord George Gordon, William Cobbett, and Daniel O'Connell.

Charles Tilly is one of the most important historians of recent years...This [book] is a breath of fresh air in the increasingly dusty room of texts without human agents behind them...It is an important [book]. In its restatement of 'hard' history against cultural studies, many will see it as backward-looking. They would be very foolish...Historians have gone too far down the road with cultural theory and are in danger of negating their own vocation completely. Tilly reminds us, with John Cornford, that 'facts are stubborn things'--and that history without facts is a peculiar discipline indeed.--Alun Howkins "New Statesman and Society "

[A]n impressive effort has been made by Tilly to prove his point, that the changeover from one mode of protest to another, deeply influenced the political system of that day and led to some lasting and meaningful socio-political changes in Great Britain. From his conclusions it appears that the greater the incorporation of the masses in Great Britain into the accepted political dispensation of that time, the greater appeared their inclination to change their methods of contention...[A]n interesting, well researched and thought provoking work.--Professor M. Roth "South African Journal of Sociology "

As always, Charles Tilly asks big questions and marshals precise theoretical formulations and massive empirical data in his search for answers...Contrasting the repertoire of contention in 1758 with that of 1833, Tilly discerns a new variety of claim-making taking shape, which in turn shares many features with our present-day modes of contention...[A] short review can hardly do justice to the complexity of Tilly's detailed argument and evidence.--James Epstein "Albion "

This is vintage Tilly. His central thesis is that the ways British people gathered and organized to make public claims on each other changed radically between the 1750s and the 1830s...Tilly has provided sociologists and historians with a magnificent empirical resource accompanied by a subtle and powerful framework of interpretation. His approach is solidly rooted in the great and fertile tradition encompassing Barrington Moore and Norbert Elias..It is not often that historical scholarship is so effectively harnesses to the sociological imagination.--Dennis Smith "American Journal of Sociology "

Tilly has spent many years creating a database of some 8,000 'contentious gatherings' (CGs) from south-east England in 13 selected years between 1758 and 1828 and from the whole of Britain between 1828 and 1834...He thus provides a substantial quantitative backing for the identification of changes over time. The result is a book which makes an important contribution to our understanding of the making--some would say remaking--of the public sphere in Britain...It is a thoughtful book, often innovative.--R. J. Morris "Economic History Review "

In theoretical vision, in sensitivity to the kinds of claims archival data can and cannot support, in clarity of writing and attention to detail, this is a book of exceptionally high quality.--Roger V. Gould "Contemporary Sociology "

Chuck Tilly's work on social protest in France and Britain barely needs any introduction. He is the doyen historical sociologist of his generation. Through his own work and that of his many research students he has had a major impact on the development of social history, particularly in the United States. This book has long been awaited as the culmination of his Contentious Gatherings project. So what do we find? We find an admirable survey of the various turns in the historiography of popular protest in Britain in the eighteenth and nineteenth centuries delivered in the clear, concise, and thought-provoking way that is Tilly's hallmark...We also have running through the book an excellent history of the socio-economic and political transformations that seized Britain between 1750 and 1840 which could be culled from the body of the text to make not only a best-selling but also an intellectually challenging undergraduate text.--Andrew Charlesworth "Labour History Review "

Popular contentions in 18th- and 19th-century Britain have attracted considerable scholarly attention, but they have rarely been approached with the thoroughness the Tilly brings to the subject...In an original and persuasive argument, Tilly connects the changing character of contention with the concentration of capital and the augmentation of British state power.--Choice

Between 1750 and 1840 ordinary British people abandoned such time-honored forms of protest as collective seizures of grain, the sacking of buildings, public humiliation, and physical abuse in favor of marches, petition drives, public meetings, and other sanctioned routines of social movement politics. The change created - perhaps for the first time anywhere - mass participation in national politics. Charles Tilly is the first to address the depth and significance of the transmutations in popular collective action during this period. As he unravels the story of thousands of popular struggles and their consequences, he illuminates the dynamic relationships among an industrializing, capitalizing, proletarianizing economy; a war-making, growing, increasingly interventionist state; and the internal history of contention that spawned such political entrepreneurs as Francis Place and Henry Hunt. Tilly's research rests on a catalog of more than 8,000 "contentious gatherings" described in British periodicals, plus ample documentation from British archives and historical monographs. The author elucidates four distinct phases in the transformation to mass political participation, and identifies the forms and occasions for collective action that characterized and dominated each. He provides rich descriptions not only of a wide variety of popular protests but also of such influential figures as John Wilkes, Lord George Gordon, William Cobbett, and Daniel O'Connell. This engaging study offers a vivid picture of Great Britain during a pivotal era.