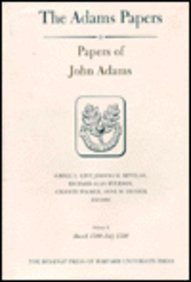 On the last day of December 1780, John Adams wrote that he had just spent "the most anxious and mortifying Year of my whole Life." He had resided first at Paris, then at Amsterdam, attempting, without success, to open Anglo-American peace negotiations and to raise a Dutch loan. In volumes 9 and 10 of the Papers of John Adams, over 600 letters and documents that Adams sent to and received from numerous correspondents in Europe and America provide an unparalleled view of Adams's diplomacy and a wealth of detail on the world in which he lived. These volumes chronicle Adams's efforts to convince the British people and their leaders that Britain's economic survival demanded an immediate peace; his "snarling growling" debate with the French foreign minister, the Comte de Vergennes, over the proper Franco-American relationship; and his struggle to obtain a loan in the Netherlands, where policies were dictated by Mammon rather than republican virtue. Adams's writings, diplomatic dispatches, and personal correspondence all make clear the scope of his intelligence gathering and his propaganda efforts in the British, French, and Dutch press. The letters reflect his interest in Bordeaux wines, the fate of Massachusetts Constitution that he had drafted in 1779, and political developments in Philadelphia, Boston, London, and St. Petersburg. The volumes leave no doubt as to John Adams's unwavering commitment to the American cause. Even in this most difficult year, he believed the revolution in America to be "the greatest that ever took Place among Men." He felt honored to serve a new nation where "the Wisdom and not the Man is attended to," whose citizens were fighting a "People's War" from which the United States would inevitably emerge victorious to take its rightful place on the world stage.

Women's rights and the birth of a nation are just two subjects in the enormous scope of the Adams Papers, a 250,000-page collection of letters, diaries, and public papers of President John Adams, Abigail Adams, their son, John Quincy Adams, who became the country's sixth president, and other members of the Adams clan... Together, the writings not only chronicle much of the nation's early history, but they provide one of the longest and most complete views of the life of an American family--albeit an extraordinary one--during the 18th and 19th centuries.--Alvin Powell "Harvard Gazette "

Gregg L. Lint is Series Editor of the Papers of John Adams at the Massachusetts Historical Society.

PAPERS OF JOHN ADAMS, VOLUME 9 A