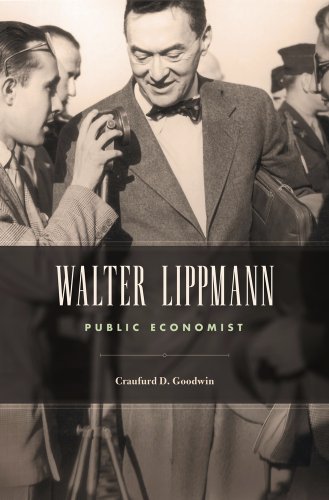 Walter Lippmann set an unmatched standard for a journalist interpreting (and leavening) expert opinion to newspaper readers in the middle third of the twentieth century. He introduced Keynesian economics to the generation of the New Deal but never lost interest in markets. He precipitated the founding of the Mont Pelerin Society after World War II but declined to join. And he remained on top of the story well into the Sixties, when the New Economics actually became public policy. It was a golden age. Craufurd Goodwin, who in the forty years that followed became dean of historians of American economic thought, has reanimated Lippmann and his approach with an eye to its many lessons for the present day. --David Warsh, economicprincipals.com

Book Description HARVARD UNIVERSITY PRESS, United States, 2015. Hardback. Condition: New. Language: English. Brand new Book. Walter Lippmann was the most distinguished American journalist and public philosopher of the twentieth century. But he was also something more: a public economist who helped millions of ordinary citizens make sense of the most devastating economic depression in history. Craufurd Goodwin offers a new perspective from which to view this celebrated but only partly understood icon of American om 1931 to 1946 Lippmann pursued a far-ranging correspondence with leading economic thinkers: John Maynard Keynes, Lionel Robbins, Friedrich Hayek, Henry Simons, Adolf Berle, Frank Taussig, and others. Sifting through their divergent views, Lippmann formed his own ideas about economic policy during the Great Depression and shared them with a vast readership in his syndicated column, Today and Tomorrow. Unemployment, monetary and fiscal policy, and the merits and drawbacks of free markets were just a few of the issues he helped explain to the public, at a time when professional economists who were also skilled at translating abstract concepts for a lay audience had yet to come on the scene.After World War II Lippmann focused on foreign affairs but revisited economic policy when he saw threats to liberal democracy. In addition to pointing out the significance of the Marshall Plan and the World Bank, he addressed the emerging challenge of inflation and what he called "the riddle of the Sphinx": whether price stability and full employment could be achieved in an economy with strong unions. Seller Inventory # BTA9780674368132