Items related to The Roman Triumph 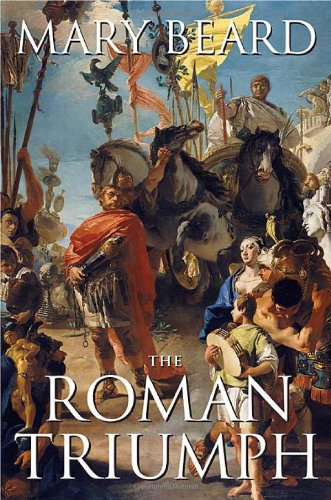 It followed every major military victory in ancient Rome: the successful general drove through the streets to the temple of Jupiter on the Capitoline Hill; behind him streamed his raucous soldiers; in front were his most glamorous prisoners, as well as the booty he'd captured, from enemy ships and precious statues to plants and animals from the conquered territory. Occasionally there was so much on display that the show lasted two or three days.A radical re-examination of this most extraordinary of ancient ceremonies, this book explores the magnificence of the Roman triumph - but also its darker side. What did it mean when the axle broke under Julius Caesar's chariot? Or when Pompey's elephants got stuck trying to squeeze through an arch? Or when exotic or pathetic prisoners stole the general's show? And what are the implications of the Roman triumph, as a celebration of imperialism and military might, for questions about military power and "victory" in our own day? The triumph, Mary Beard contends, prompted the Romans to question as well as celebrate military glory.Her richly illustrated work is a testament to the profound importance of the triumph in Roman culture - and for monarchs, dynasts and generals ever since. But how can we re-create the ceremony as it was celebrated in Rome? How can we piece together its elusive traces in art and literature? Beard addresses these questions, opening a window on the intriguing process of sifting through and making sense of what constitutes "history."

"But how much do we really know about Rome's supreme honour, and how much is
myth and invention? Not much and quite a lot, it turns out. Beard's brilliant analysis
locates the ritual in the shifting political, social and martial worlds of Rome.
Illuminating moments abound..."
-- - Marc Lambert, Scotland on Sunday, 6 January 2008

"But this is no ordinary history. It is not a reconstruction but a deconstruction, a
virtuoso display of how to interrogate one's sources. Not only that, it is written with
sly subtlety, delightful humour and an agreeable absence of jargon." -- - Christian Tyler, Financial Times, 12 January 2008

"Reading Mary Beard's The Roman Triumph, makes you realise that the inherited
professional wisdom isn't much more accurate that [a] TV version, because our
supposedly informed view of what a triumph was really like turns out to be a
bricolage of scraps of information, recycled so often it has taken on its own authority.
This book gives a bracing lesson in the use and abuse of evidence, as Beard teases
apart the various bits and pieces that have gone to make up the conglomerate picture
of the timeless essence of the triumph. This learned and spirited book could have been
no more than an exercise in debunking and dismantling. Beard enjoys debunking and
dismantling, and does it with panache, but her unpicking of the evidence and her
demolition of the consensus is not meant to create an epistemological no-man's land:
she wants to highlight the rewarding difficulty of the project of history, not its
impossibility."
-- - London Review of Books 21 February 2008 Denis Feaney

A meticulously researched and well-argued book, Mary Beard sets out to challenge what she calls the `spurious certainties surrounding the Triumph
-- London Review of Books, 7 August 2008

A meticulously researched and well-argued book, Mary Beard sets out to challenge what she calls the `spurious certainties surrounding the Triumph