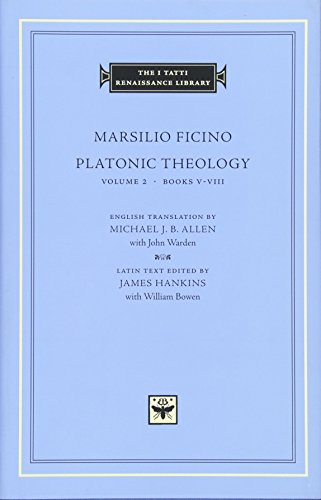 Marsilion Ficino's Platonic evangelising was eminently successful and widely influential, and his Platonic Theology, translated into English in this edition, is one of the keys to understanding the art, thought, culture, and spirituality of the Renaissance.

An aristocratic devotion to our culture continues to manifest itself even today in the most prestigious centers of study and thought. One has merely to look at the very recent (begun in 2001), rigorous and elegant humanistic series of Harvard University, with the original Latin text, English translation, introduction and notes.--Vittore Branca "Il Sole 24 Ore "

The Loeb Classical Library...has been of incalculable benefit to generations of scholars...It seems certain that the I Tatti Renaissance Library will serve a similar purpose for Renaissance Latin texts, and that, in addition to its obvious academic value, it will facilitate a broadening base of participation in Renaissance Studies...These books are to be lauded not only for their principles of inclusivity and accessibility, and for their rigorous scholarship, but also for their look and feel. Everything about them is attractive: the blue of their dust jackets and cloth covers, the restrained and elegant design, the clarity of the typesetting, the quality of the paper, and not least the sensible price. This is a new set of texts well worth collecting.--Kate Lowe "Times Literary Supplement "

The main work, the editing and translation of Ficino's text, has been done superbly well. Allen and Hakins have begun a work of scholarship of the highest caliber, whose continuation is eagerly awaited. And since it is such a rare thing, let me add that the book is set in a very beautiful font, which also makes it an aesthetic pleasure to read.-- (08/01/2002)

Ficino set out to show that the ancient Neoplatonic philosophy embodied a "gentile theological tradition," one that complemented the Mosaic revelation to the Jews and prepared its devotees for the final truths of Christianity. Ficino worked in full knowledge of the internal complications of Neoplatonism. He wrote and argued in styles that ranged from the logical and synthetic to the poetic and evocative, as he struggled to find ways to prove that the universe was orderly and governed by a Creator and to lay out the place within it of the immortal human soul.-- (10/05/2006)

The second volume of Marsilio Ficino's Platonic Theology has now been added to the prestigious [I Tatti] collection...The text produced in this new edition reflects with greater faithfulness and completeness, compared to previous attempts, Ficino's spirit and style...For these reasons the edition of the Platonic Theology published by Harvard University Press promises to give us an excellent contribution to the progress of Ficino studies and studies on Renaissance and modern Neoplatonism.--Lettere Italiane

The "Platonic Theology" is a visionary work and the philosophical masterpiece of Marsilio Ficino (1433-1499), the Florentine scholar-philosopher-magus who was largely responsible for the Renaissance revival of Plato. A student of the Neoplatonic schools of Plotinus and Proclus, he was committed to reconciling Platonism with Christianity, in the hope that such a reconcilliation would initiate a spiritual revival and return of the golden age. His Platonic evangelising was eminently successful and widely influential, and his Platonic Theology, translated into English in this edition, is one of the keys to understanding the art, thought, culture, and spirituality of the Renaissance.