Items related to The Turquoise Mountain: Brian Blessed on Everest 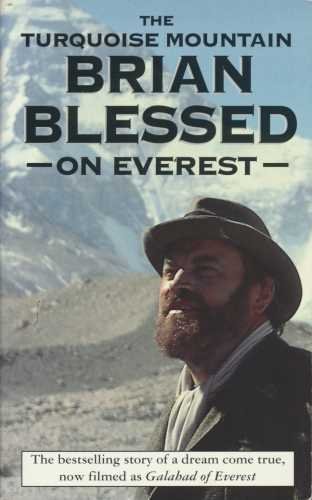 From the age of seven, when he read about George Mallory's 1924 ascent of Everest in his "Hotspur" comic, Brian Blessed dreamed of following in Mallory's footsteps. At the age of 53, accompanied by a camera crew, he realized that dream. Wearing the same type of clothing as Mallory, and without oxygen, Blessed reached 26,3000 feet - 2,000 feet below the summit - and turned back only under pressure from the Chinese Government. Published to coincide with the release of the film "Galahad of Everest", in which Blessed stars, "The Turquoise Mountain" tells the whole story, from his spellbound childhood fascination with the idea of climbing Everest, through its development into a passionate obsession, to its finally becoming a reality. Blessed holds us enchanted through it all: from the arduous training he underwent and his preparatory meetings with Captain John Noel - the last survivor of the 1924 expedition - and mountaineering veterans Reinhold Messner and Chris Bonington; through the journey to the Himalayas and his encounters with the Dalai Lama and the King of Bhutan; to the awesome ascent itself, full of danger, tragedy, fear, sickness, privation - and, ultimately, tranquillity.