Items related to Triumph and Tragedy of Lyndon Johnson: The White House...

Califano, Joseph A. Triumph and Tragedy of Lyndon Johnson: The White House Years

Triumph and Tragedy of Lyndon Johnson: The White House Years 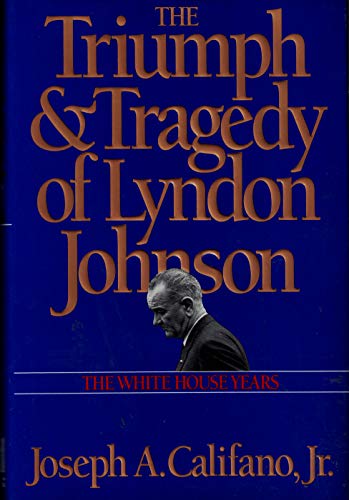 "Anyone who wishes to feel what it was really like to be in the trenches with Johnson must read this account....The author's details are graphic, intimate, sometimes scatological. They bring the Johnson manner alive and glowing....Nobody who loves our system of government should fail to turn to Califano for instruction and inspiration."--Henry F. Graff "The New Leader "

"Taking on a character like LBJ was as daunting asone might imagine. This book helped me shape the role in a way that onlysomeone who actually knew the 36th president could. The book containsinsightful and honest details of this larger-than-life character, and allowedme to see the greatness of his impassioned hope, and the minutia of histroubled soul. He was indeed a Triumph and a Tragedy. Thank you Joe, forbringing him to life for me and millions of others."--Bryan Cranston, Tony Award-winning actor portraying LBJ in the play ALL THE WAY

"A joy to read. A walk through the [most tumultuous] half-decade from 1964 to 1969 ... Oh what anecdotes. Johnson leaves you breathless, disbelieving, aghast...recommended without reservation."--Stephen Ambrose "The Washington Post Book World "

"Terrific.... The best insider account I've read of the LBJ administration to date."--Robert Dallek, author of LONE STAR RISING and LYNDON B. JOHNSHON: PORTRAIT OF A PRESIDENT

"Just watching Johnson wheel and deal through Califano's eyes makes a rousing good story. Johnson's successors in the White House must still salivate at the kind of arm-twisting, ball-busting tactics that permitted the President to sweep through his legislative package."--Ellen Dahnke "The Nashville Tennessean "

"Joe Califano...had a ringside seat for LBJ's amazing success and dizzying descent. His highly entertaining and thoughtful memoir is the best description of the inner workings of the Johnson White House I have ever read and LBJ--inspiring, terrifying, funny and tragic--comes alive in a way no other writer has managed."--Robert Schenkkan, Pultizer Prize winner, Tony Award-winning author of ALL THE WAY

"One of the very best presidential memoirs I have ever read."--Liz Smith "Newsday "

"Joe Califano's gripping memoir of life with LBJ is one of my favorite books. No aide to this Texas President was closer to him than the Brooklyn-born Califano, who saw almost everything and ardently shared his domestic purposes, yet--and this is so rare among White House memoirs--writes about the boss he served, after decades of hindsight, with surprising detachment and analytical brilliance. Triumph and Tragedy is funny, poignant and unforgettable. Future generations who wish to know what it was really like to work, day to day, alongside this towering, incomparable President during some of the most consequential moments in American history would be well advised to start here."--Presidential historian and author Michael Beschloss

"Few books radically change my opinion, but Joseph A. Califano, Jr.'s The Triumph and Tragedy of Lyndon Johnson has....Anyone reading Mr. Califano will realize, wow, how he got things done....Johnson's legislative program was dazzling, with its historic measures in civil rights, Medicare, Medicaid and Federal Aid to education...."--Ken Adelman "Washington Times "

Joseph A. Califano, Jr. spent thirty years in Washington at the top of the Pentagon, on the White House staff as chief domestic advisor to the President, and in the Cabinet. He worked as an attorney for The Washington Post during Watergate and has represented clients as varied as the Black Panthers and Coca Cola. He also spent years on Wall Street and served on more than fifteen public company boards and numerous not-for-profit boards. He is founder of The National Center on Addiction and Substance Abuse at Columbia University (CASA). He has written fourteen books, including Our Damaged Democracy. He lives in Westport, Connecticut.

TRIUMPH AND TRAGEDY OF LYNDON JO