Items related to Trigger and Friends 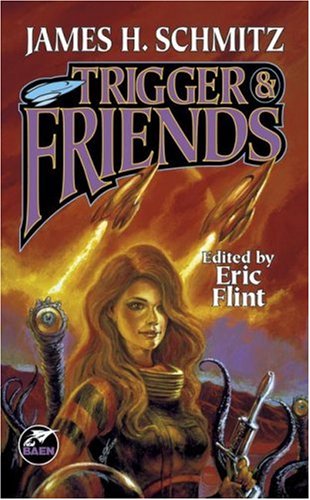 IF BUREAUCRACIES HAD STARSHIPSCon games. Corrupt governors. Deadly rivalries between departments of the same government. And, of course, the long arm of the Mob. Even in our future among the stars, some things never change -- except that the governors run (and ruin) planets, the rivalries are fought with spacecraft and energy bolts, and the mobsters smuggle "real" illegal aliens and make their getaways with subspace portals. It's all just another day in that bastion of galactic peace and democracy, the Federation of the Hub ---- "and somebody has to clean up this mess!"Join secret agent Trigger Argee, scout adventurer Heslet Quillan and Holati Tate, master of intrigue, as they battle the criminal element on its own interstellar turf...and make the future a little safer for the rest of us.

1. Trigger & Friends (The Complete Federation of the Hub, Vol. 3)

2. Trigger & Friends (The Complete Federation of the Hub, Vol. 3)

3. Trigger & Friends (The Complete Federation of the Hub, Vol. 3)