Items related to The Unheard Cry for Meaning: Psychotherapy and Humanism... 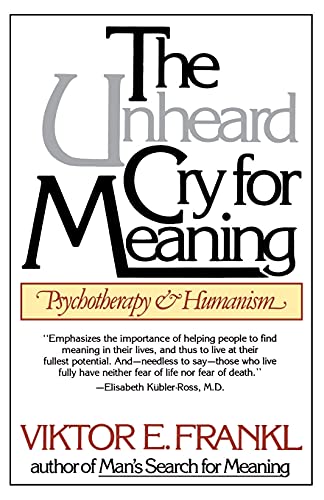 The founder of logotherapy explores the uniqueness of man's humanness, attacks the pseudo-humanism in current psychoanalysis, and presents a case for reinvesting psychoanalysis with humanism while preserving the traditions of Freudian analysis and behaviorism

Viktor E. Frankl was Professor of Neurology and Psychiatry at the University of Vienna Medical School. For twenty-five years he was head of the Vienna Neurological Policlinic. His Logotherapy/Existential Analysis came to be known as the "Third Viennese School of Psychotherapy." He held professorships at Harvard, Stanford, Dallas, and Pittsburgh, and was Distinguished Professor of Logotherapy at the U.S. International University in San Diego, California.

Born in 1905, Frankl received the degrees of Doctor of Medicine and Doctor of Philosophy from the University of Vienna. During World War II he spent three years at Auschwitz, Dachau, and other concentration camps. Through four decades Dr. Frankl made innumerable lecture tours throughout the world. He received honorary degrees from twenty-nine universities in Europe, the Americas, Africa, and Asia. He held numerous awards, among them the Oskar Pfister Award of the American Psychiatric Association and an Honorary Membership of the Austrian Academy of Sciences. Frankl's thirty-nine books appeared in forty-eight languages. His book Man's Search for Meaning has sold millions of copies and has been listed among "the ten most influential books in America."?Viktor Frankl died 1997 in Vienna.

Book Description SIMON & SCHUSTER, United States, 1979. Paperback. Condition: New. Language: English. Brand new Book. In our age of depersonalization, Frankl teaches the value of living to the fullest.Upon his death in 1997, Viktor E. Frankl was lauded as one of the most influential thinkers of our time.The Unheard Cry for Meaning marked his return to the humanism that made Man's Search for Meaning a bestseller around the world. In these selected essays, written between 1947 and 1977, Dr. Frankl illustrates the vital importance of the human dimension in psychotherapy. Using a wide range of subjects?including sex, morality, modern literature, competitive athletics, and philosophy?he raises a lone voice against the pseudo-humanism that has invaded popular psychology and psychoanalysis. By exploring mankind's remarkable qualities, he brilliantly celebrates each individual's unique potential, while preserving the invaluable traditions of both Freudian analysis and behaviorism. Seller Inventory # AAV9780671247362

5. The Unheard Cry for Meaning: Psychotherapy and Humanism

6. The Unheard Cry for Meaning: Psychotherapy and Humanism (Touchstone Books)