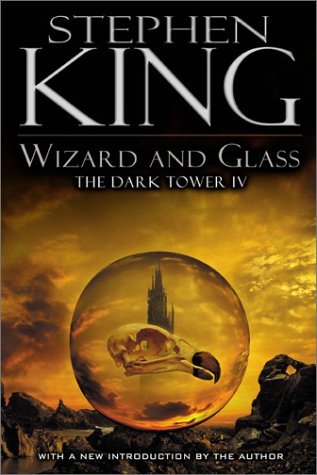 Roland and his companions venture on a new journey into the Gunslinger's past, during which Roland unfolds a tale revealing the secrets of his youth, including the tragic loss of his first love. 30,000 first printing.

'King at his most ebullient. He's at his best here - as a resourceful explorer of humanity's shadow side, as a storyteller who can set pages on fire' PUBLISHERS WEEKLY

'Grim, funny and superbly energetic, it's King at his best' MAIL ON SUNDAY

1. Wizard and Glass (The Dark Tower, Book IV) With A new Introduction By The Author

2. Wizard and Glass (The Dark Tower, Book IV) With A new Introduction By The Author

Book Description Hardcover. Condition: New. Dust Jacket Condition: New. New. Sealed. Not sure if bce or trade so please do not buy if that is an issue. No returns if unsealed. International will require additional postage. Seller Inventory # ABE-1613163218494