Items related to Europe in the Sixteenth Century (Blackwell History...

Europe in the Sixteenth Century (Blackwell History of Europe) 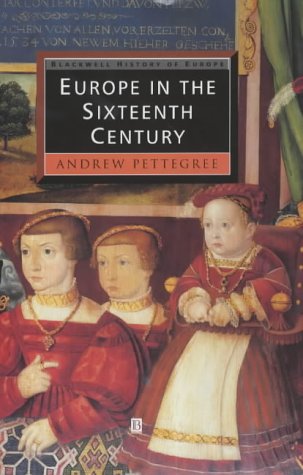 This engaging narrative history introduces readers to the central features and main developments of sixteenth-century Europe. The author's account of the major events of the age - political and religious conflicts, statebuilding, and exploration - creates a vivid sense of how it would have been to live in this tumultuous century. Events are seen within the context of the cultural, physical and intellectual environment at the time, and considered from the point of view of both Europe's elites and the broader spectrum of peoples. In tracing them, the author also provides an up-to-date synthesis of recent scholarly research written from many different approaches, and covering the whole European continent. The book is written specifically for students coming to the study of this topic for the first time and assumes no prior knowledge of the period covered. It is particularly suitable for use on survey courses, since the fifteen chapters are designed to correspond to a fifteen-week semester course.

"Andrew Pettegree is one of the most eloquent and perceptive historians working on early-modern European history, and this work is evidence of that." C. Scott Dixon, The Queen's University of Belfast


"Europe in the Sixteenth Century offers an excellent introduction to the complexities of the sixteenth century and deserves a place on the bookshelf of every library and any student." Reformation

Andrew Pettegree is Professor of Modern History at the University of St Andrew's and Director of the St Andrew's Reformation Studies Institute. He has published widely on sixteenth-century history, the English and European Reformations, and the history of the Book, including most recently a survey of The Reformation World (2000).

1. Europe in the Sixteenth Century

2. Europe in the Sixteenth Century (Blackwell History of Europe)

3. Europe in the Sixteenth Century

4. Europe in the Sixteenth Century