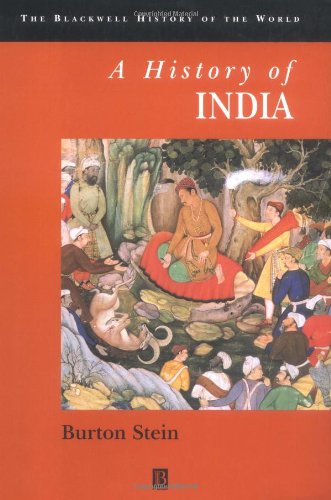 This history provides an original, succinct but sustained narrative of the development of Indian society, culture and polity from 7000 BC to the present. Themes explored include: The interactions and tensions between cultures and politics, communities and states, and the region and the outside world Findings of recent research on the range of Indian history and pre–history The nature of pre–modern as well as contemporary politics Origins and consequences of the Mughal and British conquests The link between contemporary problems – such as the role of women, poverty and religions nationalism – and India′s rich and varied history.

"A powerful and coherent interpretation of the grand sweep of India′s past ... It is a ′must read′ for all serious students of India regardless of their discipline and/or chronological focus." History.


"What impresses is Stein′s ability to take the long view of Indian history and to develop his analysis across so many centuries and through such diverse material. It is also a mark of his achievement that his book stimulates discussion of matters that he has touched on only fleetingly himself, for it is an argument as much as an account of events." Times Higher Education Supplement.

"A History of India is clearly superior to its predecessors ... The fact that Stein was willing to put forward so many provocative formulations is itself a virtue. The text itself is likely to stimulate interesting discussions in classes, something that most predecessors did not even attempt to achieve ... in its paperback version this book might be seen by many teachers as the solution to their text dilemma." The Journal of the Royal Asiatic Society.

This history provides an original, succinct but sustained narrative of the development of Indian society, culture and polity from 7000 BC to the present. It throws new light on past and currently vexing questions, and relates contemporary India, with its promise and its problems, to a rich and varied past.


The text is informed throughout by Professor Stein′s personal vision and, in particular, his special interests in political and social development and the oft–neglected South.

The book opens with an outline of the main argument. The author introduces his major themes, showing the interactions and tensions in Indian history between communities and states, between cultures and politics, and between the region and the outside world. The narrative which follows incorporates critically the accumulated findings of recent research on the whole range of Indian history and prehistory, considering the nature of premodern as well as contemporary politics, and examines the origins and consequences of the Mughal and British conquests as well as controversial recent issues, such as India′s national integrity, its commitments to secularism and to improving the condition of women.

The author′s insights reveal an in–depth understanding of India′s current problems and possibilities as it moves into its second half–century of independence. Illustrated with maps and photographs, and containing chronologies and a guide to further reading, A History of India will be valued for its vivid narrative and trenchant analysis.

1. A History of India

2. A History of India

3. A History of India Stein, Burton

4. A History of India