Items related to Companion to Victorian Literature and Culture (Blackwell... 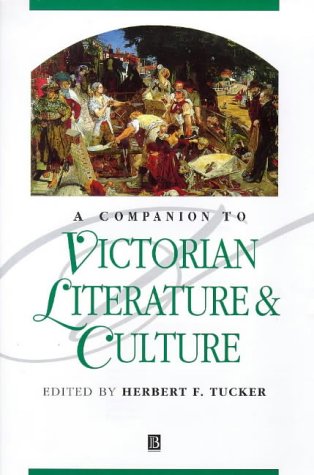 Thirty leading Victorianists from around the world collaborate here in a multidimensional analysis of the breadth and sweep of modern Britain′s longest, unruliest literary epoch.

"Each of the very varied contributions – there are 29 of them in all – is well equipped with exhaustive and up–to–date bibliographies, invaluable for further studies. There is also an excellent index. Altogether, therefore, this is an admirable and enduring book, which should certainly be added to the reference departments of all self–respecting university libraries – and a great many civic and municipal libraries, as well." Languages and Literature

"This book has been planned to meet both short–term and long–range needs. It is a reference work for consultation. " The Victorian Newsletter

"...Tucker′s Companion, with its extensive range of topics (some truly original and rarely dealt with in similar books), its well–documented essays, and constant degree of serious scholarship, apears indeed as an extremely valuable tool for students and scholars alike, and a major contribution to Victorian criticism." The Journal of the South Central Modern Language Association

Thirty leading Victorianists from around the world collaborate here in a multidimensional analysis of the breadth and sweep of modern Britain′s longest, unruliest literary epoch.

Four initial chapters of historical overview focus on climactic years (1832, 1848, 1870, 1897) in which accumulated forces for change precipitated new Victorian directions. Four chapters from Part II examine in childhood, adolescence, aging, and death the chief phases of an individual life and their literary representations, while a fifth considers how pervasively Victorian lives were influenced by sexuality.

Part III expands the midmost life phase, working adulthood, to survey prominent Victorian careers, with chapters on religion, medicine, education, law, bureaucracy, the military, banking, industry, commerce, spectacle and publishing. While each chapter of the Companion highlights literary aspects of its topic, literature as such takes centre stage in Part IV, which comprises separate chapters on the genres of poetry, fiction, sage writing, life writing, drama, and literary criticism. The book concludes with three essays that investigate Victorians′ conception of their world as defined by the maintenance and transgression of borders: between body and environment, home and street, nation and globe.

This integrated design lets the Companion combine inclusiveness with convenience. Its topical spectrum, precision of focus, and accessible style keep the book available for ready consultation, while an index and network of cross–references encourage further study. At the same time, when read sequentially the book renders a textured and polyphonic image, by diverse hands exemplifying diverse standpoints, of the Victorian imagination: a manifold cultural force that notoriously eludes neat summary, yet bequeathed to our own day a recognizable tradition with which we are destined to struggle – as scholars, as modern people – for some time to come.

1. A COMPANION TO VICTORIAN LITERAT