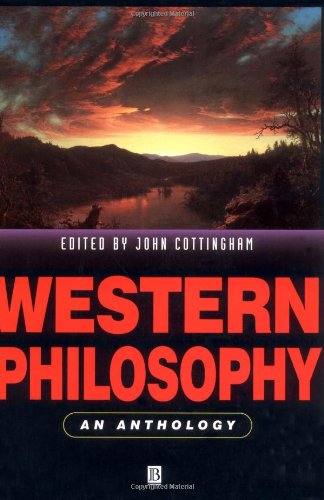 From ancient Greece to the leading philosophers of today, Western Philosophy: An Anthology provides the most comprehensive and authoritative survey of the Western philosophical tradition.


In 100 substantial and carefully chosen extracts, the volume covers all the main branches of philosophy – theory of knowledge and metaphysics, philosophy of mind, religion and science, moral philosophy (theoretical and applied), political theory and aesthetics. Chronologically and thematically arranged, the readings are introduced and linked together by a lucid philosophical commentary which guides the reader through the key arguments.

This outstanding text will support a wide variety of introductory courses in philosophy, as well as providing more advanced students with a handy collection of classic source materials.

"A truly outstanding collection. An excellent course book which also doubles as a solid reference volume. The clarity of the commentary makes classic readings accessible to the student." George Graham, University of Alabama

"By providing the means to appreciate philosophy as the great historical odyssey of the human intellect, this ambitious anthology makes philosophy come alive for students and teachers alike." David Cooper, University of Durham

".the present text should serve as an excellent choice for those electing to take the survey approach." Library Journal

"The article introductions are exemplary. Those to the Kant extracts in the epistemology and metaphysics sections, for instance, lucidly and concisely discuss the rationality–empiricist divide." Jane O′Grady, Times Educational Supplement

John Cottingham is Professor of Philosophy at the University of Reading. He is a leading authority on Descartes, and author of numerous articles and broadcast talks on early modern philosophy; he has also written extensively on ethics and the philosophy of law. He is the author of Rationalism (1984), Descartes (1986), The Rationalists (1988), and A Descartes Dictionary (1993), and is co–translator of The Philosophical Writings of Descartes. He was from 1991–5 Chairman of the British Society for the History of Philosophy, and is (since 1993) editor of Ratio, the international journal of analytic philosophy.