Items related to The Making of Modern British Politics, 1867-1939 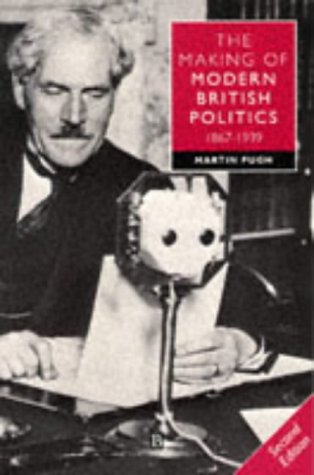 The third edition of this successful text has been revised to include a new chapter on the politics of the Second World War, and to reflect recent developments in research into the period.

"Is to be welcomed. This is a textbook of a superior sort as Pugh disavows the attempt to be a neutral assessor of the work of others and imposes his own interpretation upon the period. This leads to a clearer understanding of events." History Today

"A commanding synthesis ... succeeds brilliantly in finding the right voice to explain what matters now." London Review of Books

"Excellent book, by far the best of its kind on this period ... impressively lucid and consistent ... a remarkable book which will stimulate teachers as well as students for years to come." Society for the Study of Labour History Bulletin

First published in 1982, "The Making of Modern British Politics" is a general analysis of the process of change in British political history between the 1860s and the outbreak of the Second World War. Martin Pugh concentrates on the problems of interpretation and analysis raised by recent work in the field. He shows how politics gradually came to revolve less around the moral-political issues of the Victorian era and more around the economic and social role of the state during the 20th century. He considers the eventual decline of the Victorian Liberal Party, the explanations for the rise of Labour and the reasons for the capacity of the Conservatives to survive in changing circumstances. Extensively revised, the book reflects the findings of recent research on, among other things, the role of religion in late Victorian politics, the importance of taxation in party loyalties, the Edwardian electorate and the franchise reforms of 1918, the role of women as parliamentary voters, and the debate over the extent to which state social welfare was popular amongst the working class.