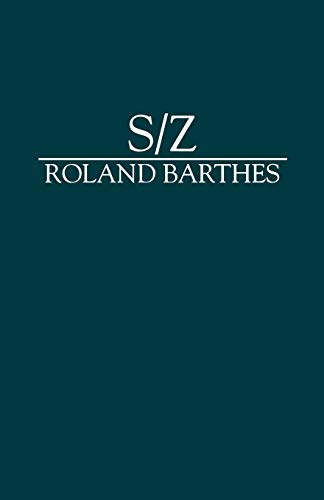 S/Z is the linguistic distillation of Barthesa s system of semiology, a science of signs and symbols, in which Balzaca s novella, Sarrasine, is dissected semantically to uncover layers of hidden meaning.

"Taken together, The Pleasure of the Text and S/Z force us to notice how much of the most interesting thought today is being carried forward in what we used to call a literary criticisma , and how important Barthesa s own contribution to redefinition of the field has been." (The New York Times Book Review)

S/Z is the linguistic distillation of Barthes′s system of semiology, a science of signs and symbols, in which a Balzac novella, Sarrasine, is dissected semantically in order to uncover layers of unsuspected meanings and connotations. In the process, Barthes reveals the immeasurably fecund nature of language. His interpretation of language and meaning within the structuralist mode is a classic work of semiotic theory, profoundly influential on a generation of Anglo–American theorists. It stands, in twentieth–century thought, alongside Levi–Strauss′s work in anthropology.