Items related to A History of West Germany: Democracy and Its Discontents,... 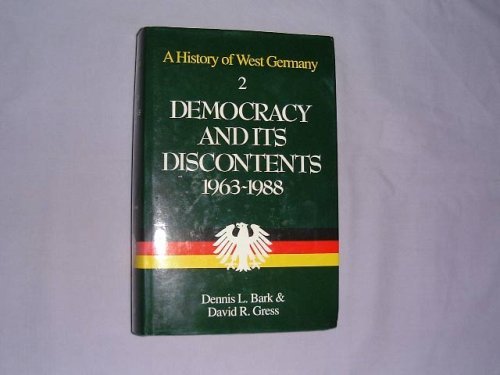 Part of a two-volume history of West Germany from 1945 to the present. The work is based on research of primary and secondary documentary material, newspaper and journal archives, state archives and interviews with a range of persons including politicians and industrialists.

"Here is a book that deserves special attention. For it has the prospect of becoming the standard work in the English–speaking world and, therefore, may well set standards of opinion. Until now no work, even remotely as comprehensive, about this history of the Federal Republic existed in the English language. In its exhaustive wealth of historical detail, its careful empiricism, and graphic, often gripping, portrayals, this work will not easily be surpassed." Das Parlament

"It would be hard to think of a more timely scholarly work than this illuminating and comprehensive study of the entire West German development since World War II." World Affairs Council Spotlight

"The authors have accomplished a real ′tour de force′. This book will be indispensable for those have to discuss or write about Germany." Le Figaro

"The two volumes offer Anglo–American readers what is until now the most reliable and critical general history of West Germany. They are well written and correct many imprecise or incorrect views and judgements that still exist about postwar German history." Journal of Institutional and Theoretical Economics

"A work of impressive scholarship, comprehensive scope, and narrative power, which will doubtless be the standard history in English for years to come." New York Review of Books

Within days of the publication of the first edition of this two–volume work the Berlin Wall was being dismantled, and within one year almost to the day Germany once more became one country and the Federal Republic of West Germany ceased to exist. The fully revised second edition describes the dramatic events of late 1989 and 1990 in which the German Democratic Republic collapsed and Germany was united by a combination of popular protest and urgent negotiation. It also contains full and detailed revisions throughout both volumes, and may now be said to be, in every sense of the word, definitive.
The work is richly illustrated with photographs, maps and tables, fully referenced and indexed. Each volume has been arranged so that it may be read and used independently of the other.