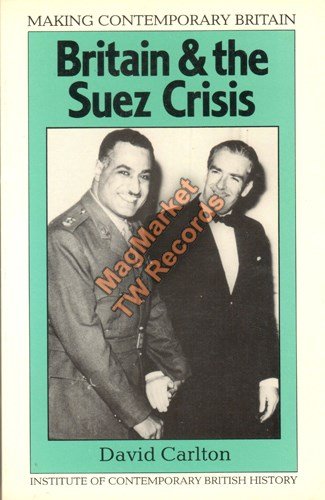 Making extensive use of official material which has recently been released and which casts particular illumination on the rupture which the Suez crisis caused in Anglo-American relations, the author examines the long-term and short-term causes, the principal events from nationalization until the aborting of the military operation in November 1956, and the consequences of the crisis on the standing of Britain with the rest of the world. The full extent of the collusion that took place among the British, the French and the Israelis before the famous ultimatum was sent to Egypt is considered, as is the role in the crisis of Prime Minister Sir Anthony Eden.

Book Description Blackwell Publishers, 1989. Paperback. Condition: Very Good. The book has been read, but is in excellent condition. Pages are intact and not marred by notes or highlighting. The spine remains undamaged. Seller Inventory # GOR001382849

Book Description Blackwell Publishers, 1989. Paperback. Condition: Good. The book has been read but remains in clean condition. All pages are intact and the cover is intact. Some minor wear to the spine. Seller Inventory # GOR002002242

Book Description Blackwell Publishers, 1989. Paperback. Condition: Fair. A readable copy of the book which may include some defects such as highlighting and notes. Cover and pages may be creased and show discolouration. Seller Inventory # GOR005115993