Items related to The Plot Against America

Roth, Philip The Plot Against America

The Plot Against America 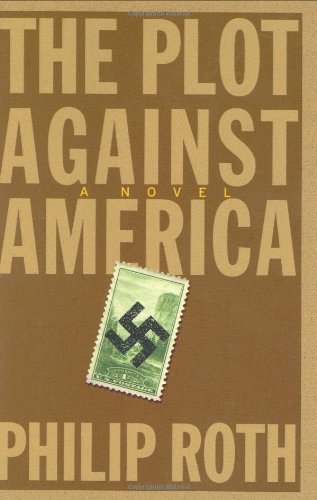 In a novel of alternative history, aviation hero and isolationist Charles A. Lindbergh defeats Franklin Roosevelt in the 1940 presidential election, negotiating a cordial accord with Adolf Hitler, accepting his conquest of Europe and anti-Semitic policies, and igniting a storm of fear for Jewish families throughout America. 150,000 first printing.

The Plot Against America is further affirmation of Philip Roth’s status as one of the most revered (and accomplished) of American novelists; another in a long line of highly impressive books that makes the days when he was know only for the masturbatory humour of Portnoy's Complaint seem every remote indeed. The new book is an astonishingly ambitious entry in the genre known as alternative history, and its re-imagining of a fascist America is as plausible and terrifying as previous alternative visions by such writers as Len Deighton and Kingsley Amis (not to mention the countless SF novelists such as Philip K Dick, progenitors of the genre, invariably irritated that their concepts are hijacked by more 'literary' novelists).

In The Plot Against America, the celebrated aviator Charles Lindbergh (almost as well known for his admiration for Hitler as for the famous kidnapping of his baby) becomes President of the United States, and history takes a very different course. Roosevelt soundly defeated, Lindbergh inaugurates an isolationist, anti-war regime, as radical social change ensues; not least the growth of anti-Jewish feeling, fanned by the anti-Semitic Lindbergh. Roth’s Jewish protagonist, Philip, watches as his parents try to ignore the growing threat around them--initially, family holidays are ruined as hotel rooms become mysteriously ‘unavailable’, but soon deportation and worse is the order of the day. Ultimately, a fightback against the new US fascism is slowly engendered.

All of this is handled with the mastery we now routinely expect from Roth, and both characterisation and plotting are structured with total assurance. All the historical detail is terrifyingly plausible, and the final sections (in which Roth reminds us what happened in the real America) seem no more persuasive than what we’ve just read. A visionary, turbulent work of literature. --Barry Forshaw

"It’s one of the great political novels for its depiction of how alterations in power affect ordinary men and women, and how obedience brings disaster." (Linda Grant New Statesman)

"In his 2004 novel, The Plot Against America, Roth precisely described the sinister and chilling nightmare in which the United States now finds itself... America has not read enough of Philip Roth" (Bernard-Henri Lévy New Statesman)

"A dark, humane masterpiece, Roth is at the peak of his powers" (The Times)

"The word genius doesn't seem excessive... The Plot Against America creates its reality magisterially, in long, fluid sentences that carry you beyond scepticism" (Guardian)

"Untouchable...he is bequeathing us a body of work that adds up to the most accomplished dissection of American political, social and personal mores" (Observer)

"Magnificent. Roth is writing the best books of his life. He captures better than anyone the collision of public and private, the intrusion of history into the skin, the pores of every individual alive" (Guardian)

"Dazzling. The most exciting novelist writing today" (Independent on Sunday)

1. The Plot Against America: A Novel

2. The Plot Against America: A Novel

3. The Plot Against America: A Novel

4. The Plot Against America: A Novel

5. The Plot Against America: A Novel [Hardcover] Roth, Philip

Book Description Condition: New. When the renowned aviation hero and rabid isolationist Charles A. Lindbergh defeated Franklin Roosevelt by a landslide in the 1940 presidential election, fear invaded every Jewish household in America. Not only had Lindbergh, in a nationwide radio address, publicly blamed the Jews for sel?shly pushing America toward a pointless war with Nazi Germany, but upon taking of?ce as the thirty-third president of the United States, he negotiated a cordial understandingâ? with Adolf Hitler, whose conquest of Europe and virulent anti-Semitic policies he appeared to accept without dif?culty. What then followed in America is the historical setting for this startling new book by Pulitzer Prizeâ??winner Philip Roth, who recounts what it was like for his Newark family â?? and for a million such families all over the country â?? during the menacing years of the Lindbergh presidency, when American citizens who happened to be Jews had every reason to expect the worst. Seller Inventory # 9780618509287

6. The Plot Against America: A Novel Roth, Philip

7. The Plot Against America