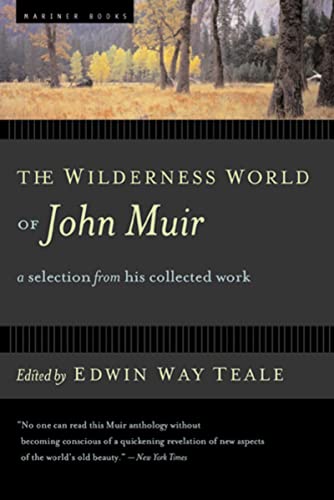 John Muir lived from 1838 to 1914. During that time he covered most of the American wilderness alone and on foot without a gun, without a sleeping bag, with only a sackful of stale bread and tea. Major credit is ascribed to him for saving the Grand Canyon and Arizona's Petrified Forest. In 1903 he convinced President Theodore Roosevelt, while on a three-day camping trip together, of the importance of a national conservation program. He had been president of the militia Sierra Club since its formation in 1892. Muir's writing, based on journals he kept throughout his life, gives our generation a picture of America only 100 years ago, still wild and unsettled. Edwin Way Teale has preserved the best of Muir's work in selections that show both the ago and the man.

Edwin Way Teale (1899-1980) was an environmental writer and photographer best known for his four-book series, The American Seasons.

John Muir (1838-1914) was one of the most influential conservationists and nature writers in American history. He was instrumental in the creation and passage of the National Parks Act, and founder of the Sierra Club, acting as its president until his death. Muir was a spirit so free that all he did to prepare for an expedition was to "throw some tea and bread into an old sack and jump the back fence."

A selection of writings by John Muir (1838-1914), the American conservationist. Carefully chosen and introduced by the editor, the 51 excerpts recreate the story of Muir's boyhood, college studies, 1000-mile walk to the Gulf of Mexico, observation of birds and trees, and discovery of glaciers in Yosemite. Originally published in 1954. Annotation c.

1. THE WILDERNESS WORLD OF JOHN MUI

2. THE WILDERNESS WORLD OF JOHN MUI

3. THE WILDERNESS WORLD OF JOHN MUI

4. THE WILDERNESS WORLD OF JOHN MUI

5. The Wilderness World of John Muir

6. The Wilderness World of John Muir (Paperback or Softback)

7. The Wilderness World of John Muir

Book Description Paperback. Condition: New. 1st. Paperback. During John Muir's extraordinary life as a conservationist, he traveled through most of the American wilderness alone and on foot, without a gun or a sleeping bag. In 1903, while on a.Shipping may be from multiple locations in the US or from the UK, depending on stock availability. 352 pages. 0.444. Seller Inventory # 9780618127511

9. The Wilderness World of John Muir

10. THE WILDERNESS WORLD OF JOHN MUI