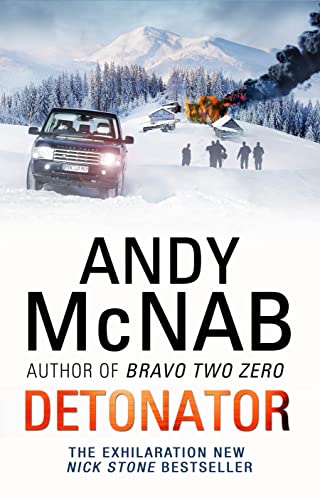 Ex-deniable operator Nick Stone has spent a lifetime in harm's way - but when someone he cares for very deeply is murdered in cold blood, he can no longer just take the pain.

A high-level internecine conflict at the dark heart of the resurgent Russian Empire and an assassin's bullet on an isolated Alpine pass propel him from an apparently run-of-the-mill close-protection task into his most brutal and challenging mission yet.

As the body count increases, Stone becomes one of Europe's Most Wanted. He must evade the elite police forces of three nations in his pursuit of faceless men who trade in human misery, and a lone wolf terrorist who threatens to unleash the Western World's worst nightmare.

Vengeance of the most explosive kind is top of Stone's agenda. The fuse has been ignited - but who really holds the detonator?

Ex-SAS, ex-Black Ops, Nick Stone returns and this time he wants vengeance. At any cost.

From the day he was found in a carrier bag on the steps of Guy's Hospital in London, Andy McNab has led an extraordinary life.

As a teenage delinquent, Andy McNab kicked against society. As a young soldier he waged war against the IRA in the streets and fields of South Armagh. As a member of 22 SAS he was at the centre of covert operations for nine years – on five continents. During the Gulf War he commanded Bravo Two Zero, a patrol that, in the words of his commanding officer, 'will remain in regimental history for ever'. Awarded both the Distinguished Conduct Medal (DCM) and Military Medal (MM) during his military career, McNab was the British Army's most highly decorated serving soldier when he finally left the SAS.

Since then Andy McNab has become one of the world’s best-selling writers, drawing on his insider knowledge and experience. As well as several non-fiction bestsellers including Bravo Two Zero, the biggest selling British work of military history, he is the author of the best-selling Nick Stone and Tom Buckingham thrillers. He has also written a number of books for children.

Besides his writing work, he lectures to security and intelligence agencies in both the USA and UK, works in the film industry advising Hollywood on everything from covert procedure to training civilian actors to act like soldiers. He continues to be a spokesperson and fundraiser for both military and literacy charities.

Book Description Bantam Press, London U.K., 2015. Hardcover. Condition: New. Dust Jacket Condition: New. 1st Edition. Hardack. London U.K. Book Condition: New. Dust Jacket: New. First Edition, First Impression. 349 pp. IN EXCELLENT CONDITION PLEASE PLEASE PLEASE CONTACT US BEFORE ORDERING THIS BOOK TO CONFIRM BOOK CONDITION AND EDITION. (most of our books are 1st editions). We can send you photos of this book with a detailed description. No foxing. Shipping is normally same day from the UK. "UK BASED SELLER ALL OVERSEAS SHIPPING IS WITH TRACKING AND SIGNED FOR. If you do not want this service please make it clear to Abebooks you wish by Ship. In Stock.- THANKS! We do not stock ex-library or Book Club editions. We offer a money back guarantee if you are not fully satisfied, please contact us if you have any questions. Satisfaction Guaranteed. Bookseller Inventory #O. 20200425_123053 . F. Seller Inventory # 005697