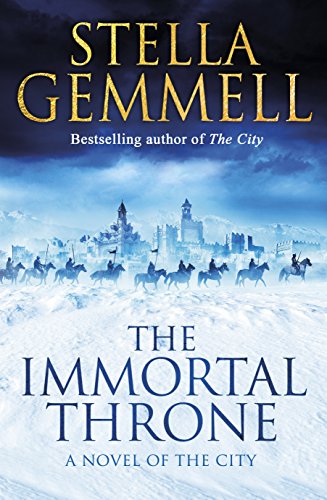 The emperor is dead...long live the emperor!
The fervent hope of the victorious rebels and the survivors of the uprising that liberated the City from tyranny is that the accession of Archange to the imperial throne will usher in a new era of freedom, peace and stability. If only that were so...
As the the City struggles to return to something resembling normal life after the devastation brought on by the rebellion, word arises of a massive army gathering to the north. No one knows where it has come from or who leads it, but it soon becomes apparent that its sole purpose is to destroy the City and annihilate all - man, woman and child - who live within its battered walls. And while warriors go forth to fight and die on the battlefield in defence of their homeland and all that they believe in, bitter family feuds and ancient rivalries, political and personal betrayals, and mindless murder surface within the palaces and corridors of power: it seems the City is under siege - from both without and within . . .
With this new novel, Stella Gemmell brings the astonishing story of the City to a spectacular climax and confirms her place as a master of the genre.

"Great fantasy, beautifully written and what a tale it told!" (RAES RANDOM RAMBLINGS)

Epic, involving and thrillingly imagined - the powerful new fantasy novel by the acclaimed author of the bestselling THE CITY.

Book Description Paperback. Condition: Very Good. The book has been read, but is in excellent condition. Pages are intact and not marred by notes or highlighting. The spine remains undamaged. Seller Inventory # GOR007612374

Book Description Bantam Press, 2016. Hardcover. Condition: Used; Acceptable. Dust jacket is damaged. **Simply Brit** Shipped with Premium postal service within 24 hours from the UK with impressive delivery time. We have dispatched from our book depository; items of good condition to over ten million satisfied customers worldwide. We are committed to providing you with reliable and efficient service at all times. Seller Inventory # 2989928

Book Description Bantam Press, 2016. Hardcover. Condition: Used; Good. **SHIPPED FROM UK** We believe you will be completely satisfied with our quick and reliable service. All orders are dispatched as swiftly as possible! Buy with confidence! Aloysius Ihezie. Seller Inventory # 2480658