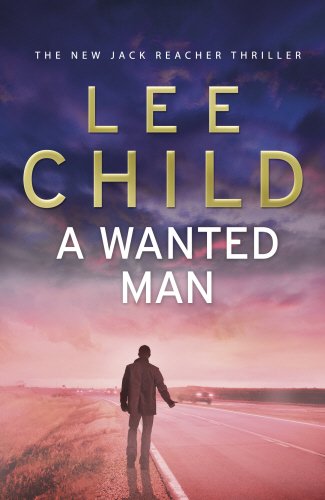 When you're as big and rough as Jack Reacher - and you have a badly-set, freshly-busted nose, patched with silver duct tape - it isn't easy to hitch a ride. But Reacher has some unfinished business in Virginia, so he doesn't quit. And at last, he's picked up by three strangers - two men and a woman.

But within minutes it becomes clear they're all lying about everything - and then they run into a police roadblock on the highway. There has been an incident, and the cops are looking for the bad guys ...

With his signature Swiss-watch plotting and heart-thumping suspense, A Wanted Man shows Lee Child at his sublimely skilful best.

'He could take out Bond, Dirty Harry, Jason Bourne and Ethan Hunt with both hands tied behind his back,. And then sleep with their girlfriends two at a time before getting the last bus out of town' Sun

"I love him. It's said that a Jack Reacher novel is bought every four seconds somewhere in the world. He is to crime fiction what Clint Easwood's 'man with no name' was to the western. Lee Child's genius in 17 novels has been to create a tough guy hero that men will envy and women will adore." (Daily Express)

"Pure escapism...He has redefined the thriller for the 21st century...Reacher is a knight errant every bit as much as Raymond Chandler's Philip Marlowe was. ...stunningly good." (Henry Sutton Daily Mirror)

"I am no longer (if I ever was) an unbiased critic. I am more of a Lee Child fan. I am pro-Reacher, his massive but benevolent brute of a drifter, vigilante hero....I'll definitely barrel through the next one too." (Andy Martin Independent)

"Smart, breathless...more ingenious than other Reacher books have been about the underground activities Reacher is thwarting." (Janet Maslin New York Times)

Reacher is back - the taut new thriller from the Sunday Times and New York Times number one bestseller, winner of the Specsavers Crime & Thriller Book of the Year