Items related to Attila: A Barbarian King and the Fall of Rome

Man, John Attila: A Barbarian King and the Fall of Rome

Attila: A Barbarian King and the Fall of Rome 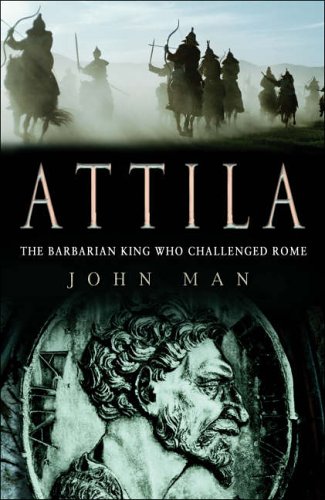 The name Attila the Hun has become a byword for barbarism, savagery and violence. His is a truly household name, but what do we really know about the man himself, his position in history and the world in which he lived? This riveting biography reveals the man behind the myth. In the years 434-454AD the fate of Europe hung upon the actions of one man, Attila, king of the Huns. The decaying Roman empire still stood astride the Western World, from its twin capitals of Rome and Constantinople, but it was threatened by a new force, the much-feared Barbarian hordes. It was Attila who united the Barbarian tribes into a single, amazingly-effective army. He launched two violent attacks against the eastern and western halves of the Roman empire, attacks which earned him his reputation for mindless devastation, and brought an end to Rome’s pre-eminence in Europe. Attila was coarse, capricious, arrogant, ruthless and brilliant. An illiterate and predatory tribal chief, he had no interest in administration, but was a wily politician, who, from his base in the grasslands of Hungary, used secretaries and ambassadors to bring him intelligence on his enemies. He was a leader whose unique qualities made him supreme among tribal leaders, but whose weaknesses ensured the collapse of his empire after his death.

'One could not wish for a better storyteller or analyst than John Man... His Attila is superb... impressive...' -- Simon Sebag Montefiore

The first popular biography of the great warlord, Attila the Hun.