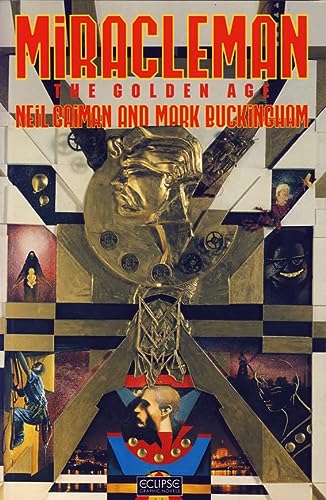 Originally a traditional superhero, Miracleman was a British answer to Superman and Batman. Recently, in the hands of writer Alan Moore, the story of Miracleman became a subtle examination of what it means to be a superhero. In this new graphic novel, Neil Gaiman continues and expands Moore's work.

NEIL GAIMAN was awarded the Newbery and Carnegie Medals for The Graveyard Book. His other books for younger readers include Coraline (which was made into an Academy-Award-nominated film) and The Day I Swapped My Dad for Two Goldfish (which wasn’t). Born in England, he has won both the Hugo and Nebula Awards. You can learn more at www.mousecircus.com.

Book Description Collins, 1993. Paperback. Condition: Good. Light foxing to page edges Good condition is defined as: a copy that has been read but remains in clean condition. All of the pages are intact and the cover is intact and the spine may show signs of wear. The book may have minor markings which are not specifically mentioned. Most items will be dispatched the same or the next working day. Seller Inventory # wbb0015137876

Book Description Eclipse Graphic Novels 1993-01-01, 1993. Paperback. Condition: Good. Item is in good condition. Some moderate creases and wear. This item may not come with CDs or additional parts including access codes for textbooks. Might be an ex-library copy and contain writing/highlighting. Photos are stock pictures and not of the actual item. Seller Inventory # DS-0586217541-3

Book Description Collins, 1992. Paperback. Condition: Very Good. Book has light shelving wear to the edges and corners, along wiht light rubbing to the covers. Aside from these minor items listed this is a very good copy. Seller Inventory # 928136