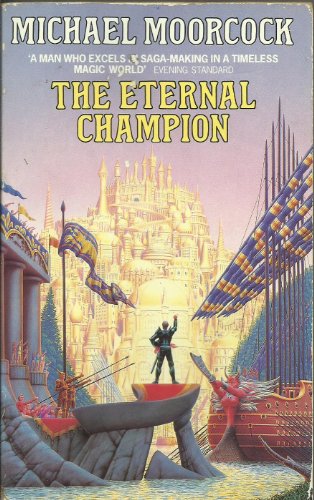 FANTASY-EREKOSE THE ETERNAL CHAMPIO,THE IMMORTAL,PULLED FROM THE 20TH CENTURY THROUGH THE TIES OF TIME TO HUMANITY,WHERE TIME DOES NOT EXIST.HE WOULD DESTROY THE ELDREN.THE HOUNDS OF EVIL WHO LIVED IN TERRITORY BETWEEN THE PLAINS OF MELTING ICE AND MOUNTAINS OF SORROW.

Moorcock's Multiverse presents for the first time, definitive editions of Michael Moorcock's most influential work, fully revised and updated by the author.

Michael Moorcock (1939-)
Michael Moorcock is one of the most important figures in British SF and Fantasy literature. The author of many literary novels and stories in practically every genre, his novels have won and been shortlisted for numerous awards including the Hugo, Nebula, World Fantasy, Whitbread and Guardian Fiction Prize. In 1999, he was given the World Fantasy Life Achievement Award; in 2001, he was inducted into the SF Hall of Fame; and in 2007, he was named a SFWA Grandmaster. Michael Moorcock is also a musician who has performed since the seventies with his own band, the Deep Fix; and, as a member of the prog rock band, Hawkwind, won a gold disc. His tenure as editor of New Worlds magazine in the sixties and seventies is seen as the high watermark of SF editorship in the UK, and was crucial in the development of the SF New Wave. Michael Moorcock's literary creations include Hawkmoon, Corum, Von Bek, Jerry Cornelius and, of course, his most famous character, Elric. He has been compared to, among others, Balzac, Dumas, Dickens, James Joyce, Ian Fleming, J.R.R. Tolkien and Robert E. Howard. Although born in London, he now splits his time between homes in Texas and Paris.

Book Description Grafton, 1990. Paperback. Condition: Good. Connecting readers with great books since 1972. Used books may not include companion materials, some shelf wear, may contain highlighting/notes, may not include cdrom or access codes. Customer service is our top priority!. Seller Inventory # S_293336506

Book Description Paperback. Condition: Very Good. The book has been read, but is in excellent condition. Pages are intact and not marred by notes or highlighting. The spine remains undamaged. Seller Inventory # GOR001216538

Book Description Paperback. Condition: Good. The book has been read but remains in clean condition. All pages are intact and the cover is intact. Some minor wear to the spine. Seller Inventory # GOR001597752

Book Description Grafton, 1990. Paperback. Condition: VERY GOOD. Pages are intact and are not marred by notes or highlighting, but may contain a neat previous owner name. The spine remains undamaged. Seller Inventory # 0586208135_abe_vg

Book Description -. Paperback. Condition: Very Good. The Eternal Champion (Erekose series) This book is in very good condition and will be shipped within 24 hours of ordering. The cover may have some limited signs of wear but the pages are clean, intact and the spine remains undamaged. This book has clearly been well maintained and looked after thus far. Money back guarantee if you are not satisfied. See all our books here, order more than 1 book and get discounted shipping. Seller Inventory # 7719-9780586208137

Book Description Collins / Grafton, 1990. Soft cover. Condition: Very Good: Light signs of wear. Cover Art: Mark Salwowski (illustrator). 1970 Edition. © 1970: 1st in the 'Eternal Champion' series of books. 9th printing of 1970 edition:- Synopsis: Erekose the Eternal Champion, the Immortal, pulled from the 20th Century through the ties of time to Humanity, where time does not exist. Erekose "You will be Humanity's scythe to sweep this way and that and cut the Eldren down as weeds. You will be Humanity's spade to dig up the roots wherever they have grown. You will be Humanity's fire to burn the waste to the finest ash. You, Erekose, will be the wind that will blow the ashes away as if they have never existed. You will destroy the Eldren. Erekose would destroy the Eldren. The Hounds of Evil who lived in territory between the Plains of Melting Ice and the Mountains of Sorrow. Hated by King Reigenos as soulless immortals, slaves of Azmobaana, The evil One - barbarians all. Erekose who, in the final event, would have to decide who were the barbarians. Who were the wronged. Whose banner he would champion. On whose side he would wield the deadly sword Kanajana. Whose love would bind him. For only he, he Eternal, could decide:- (original cost Ł2.99). Seller Inventory # 12.011.00459