Items related to Foundation and Empire (Book Two of The Foundation Series):...

Foundation and Empire (Book Two of The Foundation Series): 2/3 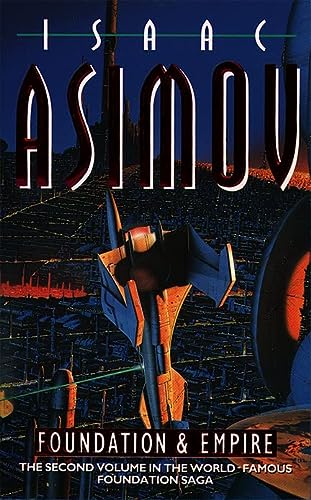 The Foundation series is Isaac Asimov’s iconic masterpiece. Unfolding against the backdrop of a crumbling Galactic Empire, the story of Hari Seldon’s two Foundations is a lasting testament to an extraordinary imagination, one whose unprecedented scale shaped science fiction as we know it today.

The First Foundation survived two centuries of barbarism as the once-mighty Galactic Empire descended into chaos. Now it mist prepare for war against the remnants of the Empire as the Imperial fleet advances on their planet, Terminus.

Hari Seldon predicted this war; he even prepared his Foundation for it. But he couldn’t foresee the birth of the mutant Mule. In possession of a power which reduces fearsome opposition to devoted slaves, the Mule poses a terrible threat to Seldon’s Foundation.

paperback, vg+ In stock shipped from our UK warehouse

Book Description Harpercollins Pub Ltd, 1994. Paperback. Condition: GOOD. Spine creases, wear to binding and pages from reading. May contain limited notes, underlining or highlighting that does affect the text. Possible ex library copy, will have the markings and stickers associated from the library. Accessories such as CD, codes, toys, may not be included. Seller Inventory # 3366017292

Book Description Harpercollins Pub Ltd, 1994. Condition: Good. A+ Customer service! Satisfaction Guaranteed! Book is in Used-Good condition. Pages and cover are clean and intact. Used items may not include supplementary materials such as CDs or access codes. May show signs of minor shelf wear and contain limited notes and highlighting. Seller Inventory # 0586013555-2-4

Book Description Harpercollins Pub Ltd, 1994. Paperback. Condition: Good. The book has been read but remains in clean condition. All pages are intact and the cover is intact. Some minor wear to the spine. Seller Inventory # GOR000050044

Book Description Harpercollins Pub Ltd, 1994. Paperback. Condition: Fair. A readable copy of the book which may include some defects such as highlighting and notes. Cover and pages may be creased and show discolouration. Seller Inventory # GOR000346272

Book Description Harpercollins Pub Ltd, 1994. Paperback. Condition: Very Good. The book has been read, but is in excellent condition. Pages are intact and not marred by notes or highlighting. The spine remains undamaged. Seller Inventory # GOR001181019