Items related to The X-Files: Ruins 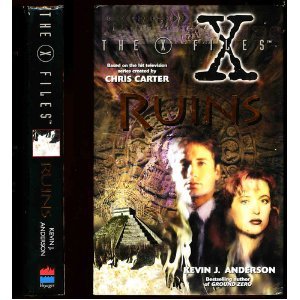 SciFi Genre Novel based on the TV Series

Book Description 1997. Hardcover. Condition: Good. All orders are dispatched the following working day from our UK warehouse. Established in 2004, we have over 500,000 books in stock. No quibble refund if not completely satisfied. Seller Inventory # mon0003849141

Book Description HarperCollins / Voyager, 1997. Hardback: 9˝" x 6Ľ". Condition: Very Good: Light signs of wear. Dust Jacket Condition: Very Good. Cover Photograph: Cliff Nielson (illustrator). 1997 Edition. © 1996: 4th in the 'X-Files' series of books. 1st printing of 1997 edition:- Synopsis: A well-connected American archaeologist, Cassandra Rubicon, disappears while exploring the lost Myan city of Xitaclan - and an FBI team is flown to the Yucatan jungles to investigate. Not an ordinary FBI team. Agents Fox Mulder and Dana Scully are investigators assigned to the X-Files, the strange and inexplicable cases the FBI wants to keep hidden from the scrutiny of the press and the public. The cases involving the paranormal, the supernatural - and possibly, the extraterrestrial. Based on a mysterious jade artifact recovered from the crumbling ruins, as well as ominous legends whispered by superstitious natives, Mulder decides there may be more to this case than simply a missing team of scientists - namely ancient curses, blood sacrifices, and deadly reptilian monsters lost in the jungles since before history. Scully is, as always, more skeptical. Her priority is to keep an eye on her partner, trying to provide logical explanations for Mulder's unorthodox speculations. Unbeknownst to the two FBI agents, the lost city of Xitaclan is the scene of an impending three-way brush war between Central American drug lords, international smugglers who deal in looted Mayan artifacts, and a covert US military commando team that has been sent to investigate, and destroy a strange electronic signal received from beneath the ruins - a signal aimed upward, at the stars! Accompanied by the father of the missing Cassandra Rubicon, Mulder and Scully must unravel the secret of Xitaclan and discover what has become of the lost archeology team before these opposing forces converge on the forgotten ruins. And unleash a power that nothing on Earth can contain. 'Ruins' is the most ambitious and exciting X-Files novel to date, as Mulder and Scully race to unearth an ancient mystery with eerie and prophetic consequences for today's world, and the future. The truth is out there - but can they bring it home to a skeptical world?:- (original cost Ł12.99). Seller Inventory # 14.005.00151