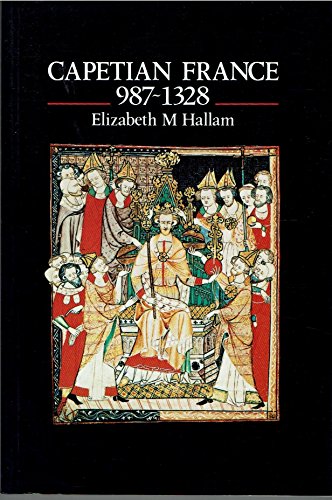 This major study is both a much-needed survey of the current state of our knowledge of the subject and also an important contribution to it. Dr Hallam examines the social, economic, religious and cultural backgrounds of the period, and highlights the importance of the French kingdom as a centre of monasticism, art and learning.

'It is an extremely useful study which can be warmly recommended'

When Hugh Capet took the throne of France in 987, his kingdom was weak and insignificant, but from an inauspicious beginning he founded a dynasty that was to last over 300 years and came to dominate western Europe.
By 1100, France was already the hub of the universe to scholars and poets, to crusaders and the designers of churches, reforming churchmen and monks. Even though its kings were comparatively insignificant figures, 'la douce France' drew people like a magnet. Then, thanks to the conquests and reforms of King Philip Augustus, by 1250 France had become a dominant force in political and economic terms as well, producing a saint-king, Louis IX, and in Philip IV a ruler so powerful that he could dictate to popes and emperors.
Capetian France is an authoritative overview of the country's development from 987 to 1328. This carefully updated second edition contains a glossary, maps and family trees, and retains the original book's popular balance between a compelling narrative and a fascinating examination of the period's main themes.
ELIZABETH HALLAM has taught at the universities of London and Reading, and is Director of Public Services at the Public Record Office.
JUDITH EVERARD is a Fellow of Fitzwilliam College, Cambridge, and is Senior Research Associate to the British Academy 'Acta of the Angevin Kings' project.

Book Description Paperback. Condition: Very Good. The book has been read, but is in excellent condition. Pages are intact and not marred by notes or highlighting. The spine remains undamaged. Seller Inventory # GOR002196365

Book Description Paperback. Condition: Very Good. Capetian France, 987-1328 This book is in very good condition and will be shipped within 24 hours of ordering. The cover may have some limited signs of wear but the pages are clean, intact and the spine remains undamaged. This book has clearly been well maintained and looked after thus far. Money back guarantee if you are not satisfied. See all our books here, order more than 1 book and get discounted shipping. Seller Inventory # 7719-9780582489103

Book Description Paperback. Condition: Very Good. Shipped within 24 hours from our UK warehouse. Clean, undamaged book with no damage to pages and minimal wear to the cover. Spine still tight, in very good condition. Remember if you are not happy, you are covered by our 100% money back guarantee. Seller Inventory # 6545-9780582489103

Book Description Condition: Poor. This is an ex-library book and may have the usual library/used-book markings inside.This book has soft covers. In poor condition, suitable as a reading copy. Please note the Image in this listing is a stock photo and may not match the covers of the actual item,650grams, ISBN:9780582489103. Seller Inventory # 8831386

Book Description Condition: Good. This is an ex-library book and may have the usual library/used-book markings inside.This book has soft covers. In good all round condition. Please note the Image in this listing is a stock photo and may not match the covers of the actual item,650grams, ISBN:9780582489103. Seller Inventory # 9090289

Book Description Paperback. Condition: Very Good. A clean, tight copy throughout with minimal wear. Dated on first inner leaf. No markings otherwise. WE ARE PROCESSING ORDERS AS NORMAL DURING THIS VIRUS EPIDEMIC, ALL ITEMS ARE SENT BY ROYAL MAIL. DISPATCHED FROM THE UK WITHIN 24 HOURS ( BOOKS ORDERED OVER THE WEEKEND DISPATCHED ON MONDAY) BY ROYAL MAIL. ALL OVERSEAS ORDERS SENT BY AIR MAIL. WE ALSO ACCEPT PAYMENT IN US DOLLARS OR EURO BY BANK TRANSFER. Seller Inventory # mon0000637246