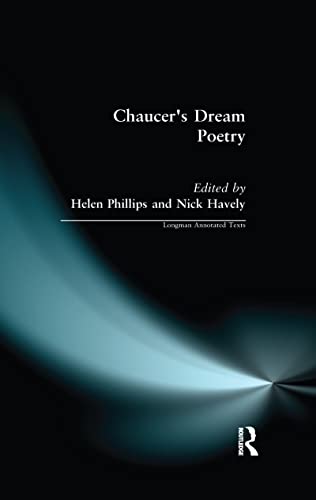 Back CoverGeneral Editors:Charlotte Brewer, Hertford College, OxfordH.R. Woudhuysen, University College, LondonDaniel Karlin, University College, LondonThis major series provides the student with accessible and authoritative annotated editions of key texts in British and American literature from medieval to modern times. Its central feature will be the quality and value of annotation on the page in bringing out the text's full range of reference and meaning for the reader. Whether as editions of major authors or works, or collections of texts on periods, genres or themes, Longman Annotated Texts will provide the key teaching editions for students, academics and all those interested in literary study.Chaucer's Dream Poetry is the first volume to provide texts of all Chaucer's four dream poems together with a full critical guide to the genre of dream poetry, and introductions to the individual poems. The texts have been newly edited by Helen Phillips and Nick Havely, who have previously produced major scholarly editions of two of the poems. This collection includes the Book of the Duchess, the House of Fame, the Parliament of Fowls, and the Prologue to the Legend of Good Women, and the Legend of Dido from the Legend of Good Women.Chaucer wrote four dream poems: works which use the frame of the fictional dream. These poems span the whole of Chaucer's career, from the Book of the Duchess to the Legend of Good Women, and together they provide an indispensable guide to the poetic agenda that informs his other works, such as Troilus and Criseyde and the Canterbury Tales. Though they are poems unsurpassed in English literature for delicacy, elegance and beauty, these texts are also profound explorations of subjects central to Chaucer's thought: love and transience, the experience of suffering and especially the suffering of women, the nature of literature, and the role of the modern vernacular poet in relation to cultural tradition. They mark Chaucer's revolutionary expe

Book Description Taylor & Francis Ltd, United Kingdom, 1998. Paperback. Condition: New. Language: English. Brand new Book. Dream literature is regarded as one of the most important genres in medieval literature and is widely studied. This text provides a succinct and clear introduction to the five central poems that comprise Chaucer's Dream Poetry, and shows his role as a leading adapter of European Literary tradition into English Literature. The poems discussed are The Book of the Duchess, The Legend of Good Women, The Legend of Dido, The Parliament of Fowls and The House of Fame. Each have an introduction setting the poem within the context of Dream Poetry and Chaucer's own work. Appendices of proper names, pronunciation and criticism are also given. This volume is unique is presenting the poems together in an editorial and critical framework. The quality of annotation is unrivalled and will make this text a major addition to the literature suitable for those interested in the genre, literary, or more general history of the period. Seller Inventory # AAV9780582040113