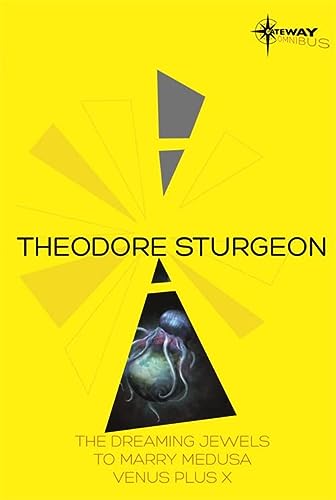 From the SF Gateway, the most comprehensive digital library of classic SFF titles ever assembled, comes an ideal sample introduction to the fantastic imagination of Theodore Sturgeon, one of the great names in science fiction.

Highly acclaimed for his short fiction, Sturgeon is nevertheless best known for his 1953 novel, MORE THAN HUMAN, and for scripting the STAR TREK episode 'Amok Time', which introduced the Vulcan mating ritual, the pon farr. This omnibus contains three of his finest works: THE DREAMING JEWELS, TO MARRY MEDUSA and VENUS PLUS X.

From the groundbreaking digital initiative, the SF Gateway, three acclaimed novels from the HUGO and NEBULA AWARD-winning Theodore Sturgeon. A perfect introduction to one of the most acclaimed authors of SFF.

Theodore Sturgeon was born Edward Hamilton Waldo in New York City in 1918. Sturgeon was not a pseudonym; his name was legally changed after his parents' divorce. After selling his first SF story to ASTOUNDING in 1939, he travelled for some years, only returning in earnest in 1946. He produced a great body of acclaimed short fiction (SF's premier short story award is named in his honour) as well as a number of novels, including MORE THAN HUMAN, which was awarded the 1954 retro-HUGO in 2004. In addition to coining Sturgeon's Law - '90% of everything is crud' - he wrote the screenplays for seminal STAR TREK episodes 'Shore Leave' and 'Amok Time', inventing the famous Vulcan mating ritual, the pon farr.