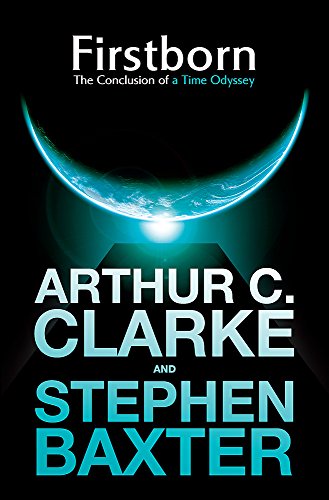 With this epic tale of altered histories and different earths, a universe where Alexander's empire prompted a different past, a world where strange alien 'eyes' gaze upon a fractured reality, a time when man is looking to colonise the red planet Arthur C. Clarke and Stephen Baxter scale new heights of ambition and sheer story telling brio.

This is classic SF adventure from two of the biggest names in the genre. A heady combination of high concept SF, big engineering projects and human drama.

"This is good, solid, hard SF, coming from a base of realism: the physics is speculative but as accurate as possible, as is the high-tech equipment. It's a strain of SF rarely done well these days: technology projected forward into a plausible future. It¿s a classic Arthur C. Clarke approach. Classic, if somewhat old-fashioned, science fiction thrills of the plausible future kind." (DREAMWATCH)

"Clarke and Baxter deliver that sense of wonder which has always been one of the things we read science fiction for. And for once the wonderful mysteries of the plot remain magical even after they've been explained." (TIME OUT Roz Kaveney)

"Firstborn is a rousing adventure, full of convincing near-future detail and a proper Clarkian sense of wonder. The enthusiasm for exploring, spreading out, solving puzzles and building a better future are relentless. Be compassionate, it says, but be clever - and never give up. It's a fitting capstone to Arthur C Clarke's writing life." (DEATHRAY)

Two of the biggest names in SF together again, with the third of the acclaimed Time's Odyssey sequence

Book Description Hardback. Condition: Good. The book has been read but remains in clean condition. All pages are intact and the cover is intact. Some minor wear to the spine. Seller Inventory # GOR001578042

Book Description Paperback. Condition: Very Good. The book has been read, but is in excellent condition. Pages are intact and not marred by notes or highlighting. The spine remains undamaged. Seller Inventory # GOR001469163

Book Description Gollancz, 2008. Hardcover. Condition: Used; Good. stains on the side. stains on some pages **SHIPPED FROM UK** We believe you will be completely satisfied with our quick and reliable service. All orders are dispatched as swiftly as possible! Buy with confidence! Aloysius Ihezie. Seller Inventory # 3816885

Book Description Gollancz, 2008. Condition: Fair. Volume 3. This is an ex-library book and may have the usual library/used-book markings inside.This book has hardback covers. In fair condition, suitable as a study copy. Dust Jacket in fair condition. Please note the Image in this listing is a stock photo and may not match the covers of the actual item,700grams, ISBN:9780575083400. Seller Inventory # 4675890

Book Description Orion Publishing Group, Limited, 2008. Condition: Good. 1st Edition. Ships from the UK. Former Library book. Shows some signs of wear, and may have some markings on the inside. Seller Inventory # 14527732-6

Book Description Orion Publishing Group, Limited, 2008. Condition: Good. 1st Edition. Ships from the UK. Shows some signs of wear, and may have some markings on the inside. Seller Inventory # 17795707-20

Book Description Gollancz, 2008. Hardcover. Condition: VERY GOOD. Pages are intact and are not marred by notes or highlighting, but may contain a neat previous owner name. The spine remains undamaged. Seller Inventory # 0575083409_abe_vg