Items related to The Last Wish: Introducing the Witcher - Now a major... 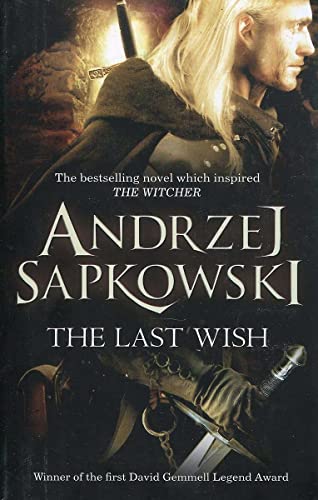 Geralt is a witcher, a man whose magic powers, enhanced by long training and a mysterious elixir, have made him a brilliant fighter and a merciless assassin. Yet he is no ordinary murderer: his targets are the multifarious monsters and vile fiends that ravage the land and attack the innocent. He roams the country seeking assignments, but gradually comes to realise that while some of his quarry are unremittingly vile, vicious grotesques, others are the victims of sin, evil or simple naivety.

One reviewer said: 'This book is a sheer delight. It is beautifully written, full of vitality and endlessly inventive: its format, with half a dozen episodes and intervening rest periods for both the hero and the reader, allows for a huge range of characters, scenarios and action. It's thought-provoking without being in the least dogmatic, witty without descending to farce and packed with sword fights without being derivative. The dialogue sparkles; characters morph almost imperceptibly from semi-cliche to completely original; nothing is as it first seems. Sapkowski succeeds in seamlessly welding familiar ideas, unique settings and delicious twists of originality: his Beauty wants to rip the throat out of a sensitive Beast; his Snow White seeks vengeance on all and sundry, his elves are embittered and vindictive. It's easily one of the best things I've read in ages.'

Like a complicated magic spell, a Sapkowski novel is a hodge podge of fantasy, intellectual discouse and dry humour. Recommended (Time Magazine)

Delightfully dry humour, mythology brimming with radical creatures and a group of interesting characters, The Last Wish is a great introduction to this universe (Fantasy Book Review)

Sapkowski has a confident and rich voice which permeates the prose and remains post-translation. I'd recommend this to any fan of Heroic or Dark fiction (SF Book)

Like Mieville and Gaiman, [Sapkowski] takes the old and makes it new . . . [a] fresh take on genre fantasy (Foundation)

There's lots of imagination on show, the writing has a strong voice, and the Witcher is an entertaining character (Mark Lawrence)

The book that heralded the arrival of a European superstar!