Items related to The Republic of Thieves (Gollancz): The Gentleman Bastard... 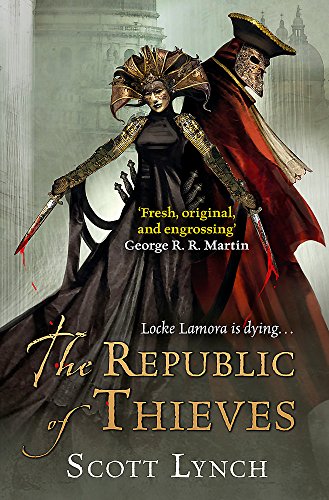 After their adventures on the high seas, Locke and Jean are brought back to earth with a thump. Jean is mourning the loss of his lover and Locke must live with the fallout of crossing the all-powerful magical assassins, the Bonds Magi.

It is a fallout that will pit both men against Locke's own long lost love. Sabetha is Locke's childhood sweetheart, the love of Locke's life and now it is time for them to meet again. Employed on different sides of a vicious dispute between factions of the Bonds, Sabetha has just one goal - to destroy Locke for ever.

The Gentleman Bastard sequence has become a literary sensation in fantasy circles and now, with the third book, Scott Lynch is set to seal that success.

Lynch layers con and counter-con, twist and counter twist, two new cities and a huge cast of characters, all of it glued together by irresistible prose and fruity, insult-stuffed dialogue. Welcome back, Scott. You've been missed. (SFX)

Lynch has lost none of his flair or ambition. ...Republic [of thieves] has a romantic centre, upon which Lynch layers con and counter-con, twist and counter twist, two new cities and a huge cast of characters, all of it glued together by irresistible prose and fruity, insult-stuffed dialogue. Welcome back Scott. We've missed you. (Dean Evans SFX MAGAZINE)

Scott Lynch has upped his game in every sense, and any epic fantasy I read after this is going to have a damned difficult act to follow. (overtheeffingrainbow.blogspot.co.uk)

It is a well-written and overall thrilling book that will keep you engaged until late into the night. (theroamingbard.wordpress.com)

Locke Lamora is proving to be one of the most engaging and enigmatic characters in fantasy, reading his voice is pure delight. (SFFWorld.blogspot.co.uk)

Everything fans of The Gentleman Bastards are waiting for, and a lot that they won't expect. (bookwormblues.net)

He's back! The long-awaited return of the most exciting commercial fantasy writer of the 21st century.

The Republic of Thieves (Gollancz)

The Republic of Thieves (Gollancz)

Book Description Hardcover. Condition: New. Dust Jacket Condition: New. 1st Edition. Scott Lynch The Republic of Thieves Signed & Numbered First Edition Published by Gollancz, London in 2013. Signed, numbered out of 250 copies and pre-publication dated "September 22, 2013" by Scott Lynch to a limitation page. These are first printings with at full number line 1 3 5 7 9 10 8 6 4 2. Also comes with a Republic of Thieves bookmark and postcard. Please note that the photo is for illustration purposes only - The number you receive will be different from that pictured.**************SHIPPED IN A BOX WITH PLENTY OF PROTECTION. Signed by Author(s). Seller Inventory # 484288

THE REPUBLIC OF THIEVES - Signed & Lined plus Bookmark & Postcard

Book Description Hardcover. Condition: New. Dust Jacket Condition: New. 1st Edition. First edition, first printing signed and lined with a quote from the book by Scott Lynch. New and unread in fine condition. Also included is a Republic Of Thieves promotional bookmark and postcard.*******SHIPPED IN A BOX WITH PLENTY OF PROTECTION. Signed by Author(s). Seller Inventory # 489348