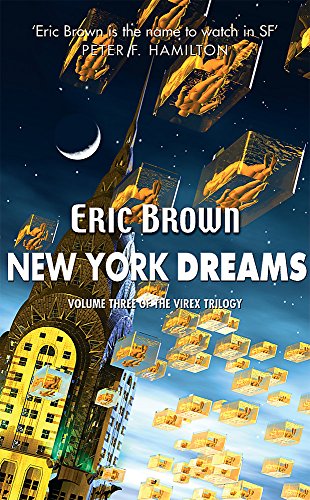 In the third and final instalment of the Virex Trilogy, private detective Hal Halliday is spending more and more time in VR to escape the harshness of the real world. Casey, his girlfriend, is with someone else, but things with the virtual Casey are idyllic . . .

In a futuristic variation upon the modern detective story, we follow Hal as he returns from retirement, seeking the answer to the mysterious disappearance of his ex-girlfriend, last seen with a child prodigy and an unknown older man. We accompany him during his encounters with the jaded individuals who now occupy sullied Manhattan and share his anguish at the gradual realisation of the devastating effects that VR is having upon his fellow citizens, rapidly losing their abilities to interact in the real world. Ironically, their inadequacies are mirrored in Hal's own physical demise, but true recognition of this cannot occur until he successfully unravels the truth . . .

Will the VR companies perfect the technology to sustain citizens in virtual reality for extended periods? And will Hal sign up, turning his back on the real world for good?

Very readable and the narrative is well constructed, and Brown successfully follows the Raymond Chandler maxim that the detective and the people he meets are ultimately more important than the case. (EDDIE ROBINSON SFX magazine)

The mystery is is mysterious enough to keep our interest. If you've read the first two volumes, you'll want to read this one. (Jon Wallace Vector magazine)

The final book in the keynote trilogy from one of Britain's most popular SF writers.

Book Description Gollancz, 2004. Paperback. Condition: Used; Good. **SHIPPED FROM UK** We believe you will be completely satisfied with our quick and reliable service. All orders are dispatched as swiftly as possible! Buy with confidence!. Seller Inventory # mon0000624411

Book Description Paperback. Condition: Good. The book has been read but remains in clean condition. All pages are intact and the cover is intact. Some minor wear to the spine. Seller Inventory # GOR003175649